What is the daily traffic jam costing you?

Assuming that you are in a jam six times in a week, you spend `108 more than you would otherwise

This year, it’s not Mumbai but Delhi-NCR which is facing the wrath of monsoons. In May 2015, Delhi witnessed a traffic jam on National Highway 8 that spread over 20km and lasted for more than 4 hours. Headline-making traffic jams haunt commuters. Sridharan Ramkumar, 41, a lawyer by profession and who travels from his home in Gurgaon Sector 56 to Saket—a distance of about 30 km, said, “Nowadays it takes me around 2 hours to commute one way. There is a new metro station coming up at Golf Link Road, and that poses a major traffic block." Many of those travelling from Gurgaon to Delhi using the Golf Link Road to reach Mehrauli Gurgaon Road face this problem. Queues are long, and slow moving. “I use a Maruti Alto 800 with CNG facility. Fuel alone costs me ₹ 300 just travelling one side," said Ramkumar.

Many other parts of Delhi have the same traffic woes. Sahil Chhabra, 28, a senior manager at Case Extraminds Edusocial Ltd, travels from Faridabad to Nehru Place daily. “The distance is hardly 20 km, but it takes one-and-a-half to cover during office hours, and more than 2 hours during the evening rush hour. The main issue is battery-operated rickshaws as they don’t have stoppage points. They stop wherever they feel like for the customers. Even the red lights don’t work in the rainy season." Chhabra’s commute costs him ₹ 300-400 daily. 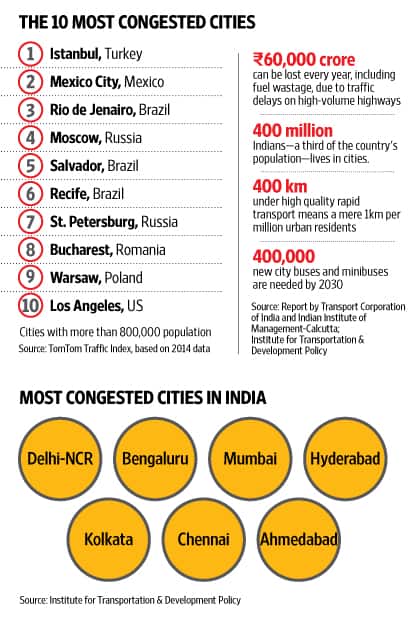 Here’s an example of how traffic jams eat away your time and your money. Petrol price in Delhi is about ₹ 67 a litre. If a car’s mileage is 15km per litre, and the distance to be covered is 20km, the vehicle’s fuel cost will be around ₹ 89. In a traffic jam, a vehicle consumes almost 20% more fuel. So, the same distance of 20km will cost you about ₹ 107. Assuming that you are in a jam six times in a week, you spend ₹ 108 more than you would otherwise.

Problem: too many roads, and too many cars

“Earlier this year, three of the Indian cities (Mumbai, Pune and Kolkata) featured in the list of Top 10 cities with the worst traffic conditions in the world (as per a list put together by Numbeo)," said Garry Singh, managing director of risk consulting and intelligence advisory firm IIRIS Pvt. Ltd.

Traffic congestion costs time and money. “Delay in traffic attracts four major costs—safety, death, delay and cost of doing business. Each of these segments, in turn, have a direct economic impact. As per the last study conducted by the Transport Corporation of India and IIM Calcutta (2012), India stands to lose almost ₹ 60,000 crore a year due to traffic delays (including fuel wastage) on high-volume highways," said Singh.

While Delhi faced a traffic snarl of historic proportions, worse was what commuters faced in Beijing, China, almost five years back, in August 2010. The line of stuck vehicles was 100 km long and it took 10 days to clear the jam. Cause? Heavy vehicles and road construction.

The Delhi area suffers from a unique problem—too many roads. “More road space attracts more traffic," said Shreya Gadepalli, director-India, Institute for Transportation & Development Policy (ITDP). “Delhi is in an enviable position. It has more street space per capita than any other metro city, it also has more cars than Mumbai, Kolkata and Chennai put together," she added. According to the Delhi Traffic Police’s website, 96,34,976 vehicles were registered in Delhi as of May 2015. In Mumbai it is 25,02,673 (as of March 2015), in Chennai 44,70,328 (April 2015) and about 445,000 in Kolkata (as of 2012), according to data from various state transport offices.

“A static car takes about 150 sq. ft. And it needs 2-3 parking slots—one at residence, one at work place and one at, say, recreational place. One parking slot has to be about 250 sq. ft in size. A two-wheeler, on the other hand, takes up only one-fifth of the space that a car needs," said Gadepalli. The solution, she says, lies in effective public transport. “The look-feel has to be like a metro," she said, adding that it must be integrated with other modes of transport.

Creating more roads and more parking space not only costs a lot, it also ends up attracting more traffic. According to a report on decongesting Delhi by ITDP, around 140km of new roads, tunnels, and flyovers are proposed in a decongestion plan, at a cost of ₹ 33,800 crore. But with a tripling of car use, the actual need would be of ₹ 290,000 crore of new roads to keep congestion at moderate levels.