The Asian refining margin of $7.2 a barrel so far in the March quarter is similar to the December quarter level as margins on most products (gasoline, diesel, naphtha) showed resilience quarter-on-quarter, according to a 21 February Nomura report. However, the year-on-year trend is weaker, seemingly due to higher product prices putting pressure on the demand growth momentum. Nomura expects Asian refinery earnings generally to decline year-on-year for 2017. That is owing to absence of inventory valuation gain (unlike 2016, when the oil price rose from $37 a barrel to $55 a barrel towards year-end) and flat refining margin ($6.2/barrel in 2016 vs Nomura’s 2017 forecast of $6.5).

Smaller firms felt the heat of demonetisation in the December quarter. An analysis of December quarter earnings by CARE Ratings shows that relatively larger companies with sales above Rs1,000 crore withstood the currency crunch better by registering revenue growth of 8.5%. In comparison, firms in the Rs500-1,000 crore and Rs100-250 crore buckets registered only marginal growth in sales of 0.3% and 1.1%, respectively. “The overall performance has been driven by the large companies that have also been less impacted by the demonetization process," CARE Ratings said in a note. “Those at the lower end of the size scales witnessed lower growth in both sales and profit." The Hybrid Annuity Model (HAM), a recent option that brings in public-private participation in a new avatar into road projects, has gathered pace. An India Ratings analysis shows that of the 37 projects the government aims to award by fiscal year 2017, those modelled on HAM have doubled since the previous year. And, 94.6% of projects based on the EPC (engineering, procurement, construction) and HAM models. Of these, two-thirds are for expansion into four lanes and about a third are for six-laning of roads. This is quite a reversal from the recent past, when there was a rush for BOT (build-operate-transfer) projects. 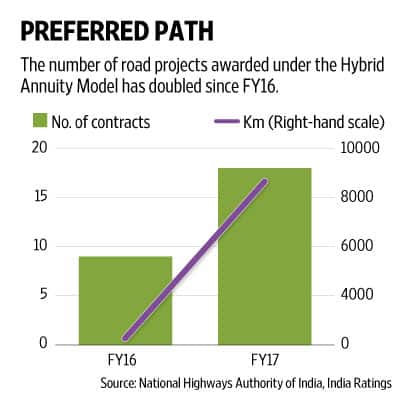