While both Vodafone and Idea have a pan-India presence as far as voice services go, their mobile broadband footprint is either weak or absent in some markets

Delhi and Mumbai are such important markets for India’s top telcos that they have allocated over a third of all their investments in spectrum on these two markets. Not so for Idea Cellular Ltd. Less than 11% of its total outlay for spectrum purchases since 2010 has gone to these markets.

And these aren’t the only markets the company has remained underinvested in after the latest spectrum auction. Analysts at Kotak Institutional Equities wrote in a note to clients that while Idea Cellular’s pan-India ambitions remain, it still has a weak mobile broadband footprint in five large markets—Delhi, Mumbai, Kolkata, Karnataka and Tamil Nadu. The company has only a single 3G or 4G carrier in these markets, compared to multiple FDD and TDD carriers acquired by its larger competitors.

“Let’s face it—Idea doesn’t have a parent that can write a $7 billion cheque. Building strong capacity in these markets is an expensive affair; Idea has to use its resources judiciously and direct them to markets where it has a high share," says an analyst at a domestic institutional brokerage firm.

To be sure, Idea Cellular’s investments in the remaining 17 circles are even higher than those of Bharti Airtel Ltd and Vodafone India Ltd. 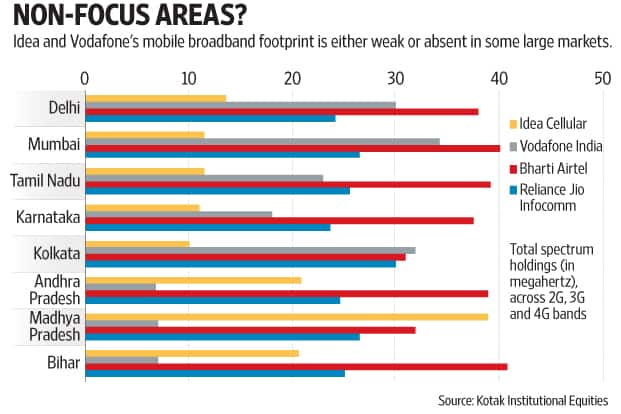 In the above-mentioned five markets, Idea Cellular has a relatively low market share, which means that its customers in these markets generate low Arpu (average revenue per user) and are unlikely to use 4G services anytime soon. As such, the firm’s strategy in these markets appears to be to compete largely in the low-end of the market, with some broadband capacity to cater to those who want to upgrade.

Bharti Airtel, Vodafone India and Reliance Jio Infocomm Ltd have acquired significant capacity in these markets, which will result in faster connectivity as well as the ability to handle large volumes of data. High Arpu customers will naturally gravitate to one of these companies.

A moot question from Idea Cellular’s perspective is if there is a business case at all to continue investing in these markets. Operating in the low-end of the market is a low-margin business, which will get further compressed with the ongoing fall in tariffs after Reliance Jio’s launch. “That Idea sees the possibility of building a business case in these circles at some point is a bold assumption, but gritty bold moves are not new to the company," Kotak’s analysts say in their note.

Vodafone India , despite the $7 billion cheque from its parent company, decided to stay without either 3G or 4G capacity in five markets—Andhra Pradesh, Bihar, Madhya Pradesh, Himachal Pradesh, and Jammu and Kashmir. These markets account for 19% of the industry’s revenues, and about 9.5% of the company’s revenue.

So, while both companies have a pan-India presence as far as voice services go, their mobile broadband footprint is either weak or absent in some markets. The rumoured merger between the two companies can fill these gaps; although, needless to say, the exercise will be far from straightforward.