Volatility gripped the world markets in January 2016 as global economic growth seems to be slowing down. The International Monetary Fund’s (IMF) World Economic Outlook in January downgraded global growth by 0.2% for both 2016 and 2017, to 3.4% and 3.6%, respectively. The World Bank projects global growth at a rate of 2.9% for 2016 in its January 2016 Global Economic Prospects report. This has led to global markets ending in the red last month. However, Bank of Japan’s decision to go for negative interest rates surprised the markets, which helped limit the losses in the last week of January. Further, the European Central Bank hinted that it would ease its policy by cutting its deposit rate in March, and this helped European markets limit losses. France’s CAC40 was down by over 5%, and the FTSE 100 by 3%.

The US S&P 500 index was down by 5.9% while Dow Jones fell by close to 4% during the month. The US Federal Reserve kept rates on hold last month and did not give any indications whether it would hike rates in March. This added to the negative sentiments in US, while continuing Chinese slowdown and volatile commodity prices contributed to the gloomy picture in Asia. Singapore’s Straits Index was down by 8.9%, and Taiwan’s TSEC 50 fell by 2.3%. China’s stock market continued to crash as the Shanghai Composite index fell by 22% during the month.

Indian equity markets continued their descent. The S&P BSE Sensex fell by 4.7% and the CNX Nifty was down by 4.8%. Foreign institutional investors (FIIs) continued to sell in the equity market—they sold close to R11,500 crore last month. This is despite domestic institutional investors (DII) purchasing shares to the tune of R6,700 crore. The rupee’s fall of 2.5% against the dollar in January added to the woes of Indian investors.

January was a bad month for the market with many sectoral indices ending the month in the negative. Telecom, capital goods and realty stocks were the worst hit. Metal stocks continued to take a beating due to volatility in global metal prices, with BSE Metal index falling by 6.8% last month. And auto stocks were down due to lower sales performance by car manufacturers. Information technology scrips managed to go against the tide with the BSE Information Technology index posting marginal gains of 0.94%. With robust demand for consumer durables and India being projected as the fifth largest consumer durables market by 2025, it is no surprise that consumer durables stocks closed in the green—the BSE Consumer Durables index was up by 1.55%. Large outflows from the equity market and frequent interventions to control the currency have led to tighter liquidity and volatile bond yields in India. The 10-year benchmark bond yields, which rose to 7.8% in the middle of January, remained range bound ahead of the Reserve Bank of India’s (RBI) policy review at the start of February. Short-term bond yields, too, saw a rise. FIIs purchasing R1,544 crore worth of bonds in the debt market during the month did not help improve the situation. The bond market is now looking to see if there would be a possible rate cut post-budget, which could help ease bond yields. Gold prices managed to move up in January. While prices in the international market were up by 5.3%, domestic prices gained 6.1%. The wedding season in India helped the yellow metal post higher gains. A weaker rupee also aided gold in moving higher in India. The rally might continue as long as global markets remain in turmoil but significant gains are not expected in the coming months. Crude oil prices managed to rally and come out of recent lows, thanks to talks about paring excess supply. Russia was seen showing willingness to reduce the supply of crude oil with its energy ministry holding talks with the Organization of the Petroleum Exporting Countries. Crude oil prices were up by 6.6% in January, but, if excess supply is not cut back, prices are expected to remain volatile. 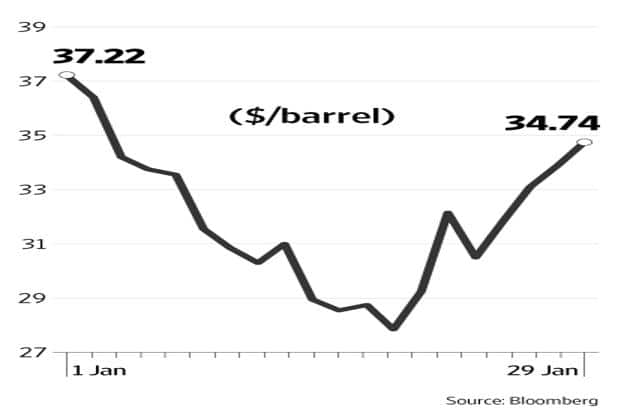 Even though global growth seems to be contracting, things are a little different in India. The Nikkei Manufacturing Purchasing Managers’ Index (PMI) touched a 4-month high in January by rising to 51.1. Levels below 50 are considered as contraction, and levels above indicate growth. Further, the Nikkei/Markit Services PMI, which measures activity in the Indian services sector, rose to 54.3 in January—the highest level since June 2014. Experts believe that this is on the back of accelerated demand leading to businesses building up a backlog of orders at a fast pace. This is expected to bode well for the economy. However, investors should brace themselves as markets are expected to be volatile until the Union budget at the end of the month. Though the markets may be panicking, it is best for long-term equity investors to stay the course; don’t redeem in a hurry and continue with systematic investment plans. If you have surplus to invest, stagger it over the next few months. Debt investors should wait for the budget to check how bond yields would pan out. 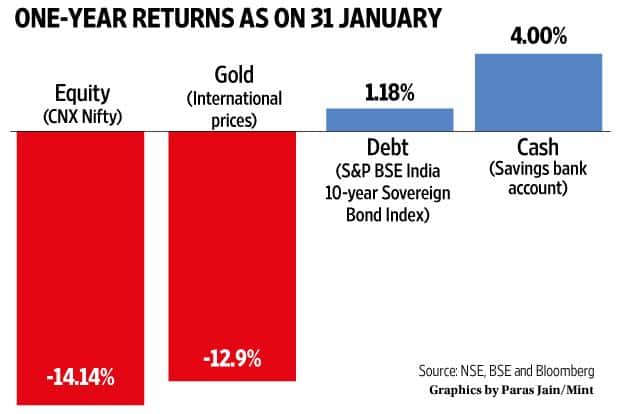 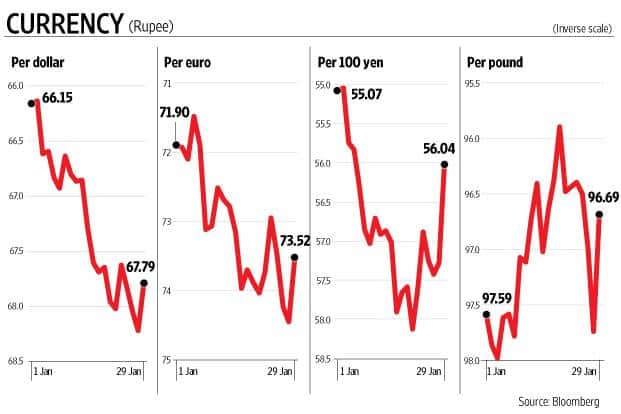