Thanks for Visiting Mint
You seem to have an Ad Blocker on. Please turn it off in order to continue, or whitelist Mint
HOW TO TURN OFF AD BLOCKER
OR
REFRESH IF YOU ALREADY TURNED OFF THE AD BLOCKER
Home >Money >Personal-finance >Sintex looks to enhance execution capabilities

Sintex Industries Ltd, known for its water tanks, announced on Monday that its wholly owned subsidiary, Sintex Infra Projects Ltd, has signed an agreement with Durha Constructions Pvt. Ltd to acquire 30% ownership of the company.

Durha Constructions is engaged in civil and mechanical construction in sectors such as power, petrochemicals and cement. The stake has been bought for Rs42 crore, which translates into 4.6 times its FY10 enterprise value to Ebitda (earnings before interest, tax, depreciation and amortization), which appears reasonable.

As a part of the agreement, Sintex would be able to acquire an additional 21% stake on pre-agreed terms by early next fiscal year.

“Though the valuation details for the incremental 21% stake to be acquired by Sintex later are not known, it would be based on the performance of the company and we believe that it would entail a multiple higher than that of the current deal," wrote analysts from Sharekhan Ltd in a note to clients on Tuesday. 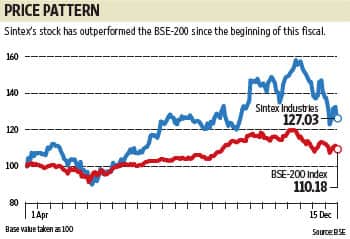 The company also has an order book of Rs750 crore across various infrastructure sub-sectors, which offers good revenue visibility.

For FY11, revenue guidance for Durha Constructions stands at Rs230 crore and an Ebitda guidance at Rs45 crore. This means that the contribution to Sintex’s financials would be marginal this fiscal.

However, this acquisition would help Sintex strengthen its execution capabilities in its monolithic business eventually. The monolithic construction business includes low-cost, mass housing solutions such as slum rehabilitation, which are quick to construct, affordable and require low maintenance.

Sintex’s stock has outperformed the BSE-200 index on the Bombay Stock Exchange since the beginning of the fiscal. At the current market price of Rs186.35 per share, Sintex’s share trades at about 10 times its estimated earnings for FY12. Increased government spending on mass housing augurs well for the company.

However, a key concern is its high working capital. At the end of the September quarter, the firm had maintained that its higher working capital can be attributed to the fact that most of the growth is coming from the monolithic construction business where the nature of debtors is different than most businesses and sometimes payments get delayed.

Slowdown in overseas subsidiaries is also another worry. While those concerns persist, at the current level, valuations do look attractive.