Usually, but not always, mutual funds with high turnover ratio are to be avoided as it indicates high churn. Here's how to read this number right

If your fund manager expects you to stay invested for the long run, isn’t he expected to do the same when he buys shares for the mutual fund schemes he manages? But that doesn’t always happen. In order to generate that extra return—and navigate the daily volatility—your fund manager has to buy or sell everyday. And that’s fine too, as he is paid to manage the fund. But too much buying and selling leads to churning that could harm your portfolio. But how do you know if your fund manager is churning or not? Hint: take a look at the portfolio turnover ratio. 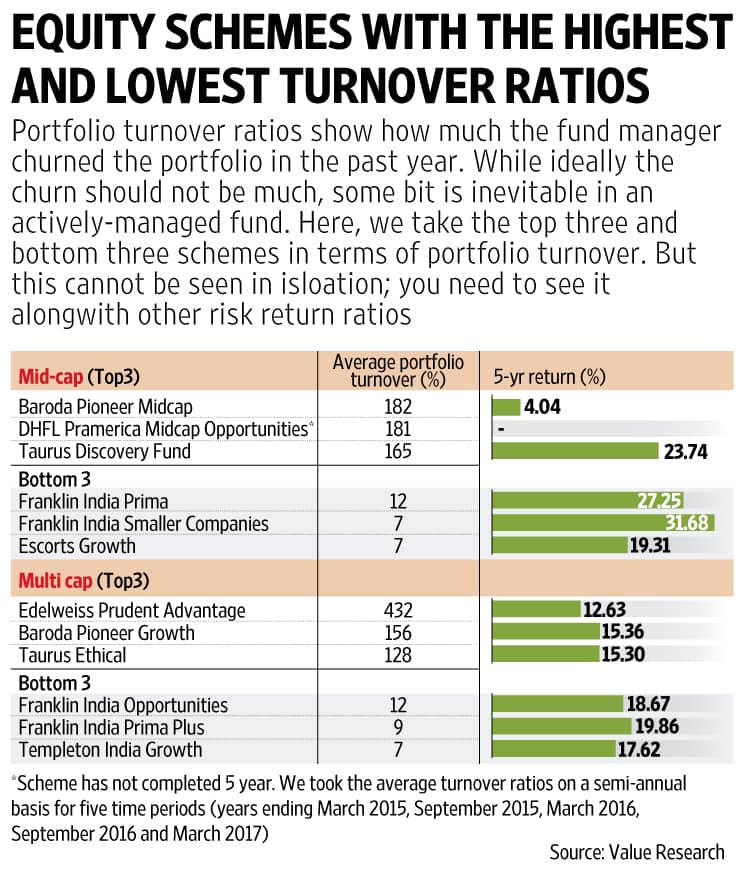 This is calculated by taking the lower of the total sales, or total purchase, and dividing it by the average month-end net assets of the scheme. These are all annual figures, so the result tells the turnover of a scheme over the past 1 year.

What is a high turnover ratio? “I would say it should be 100%. If the portfolio turnover is greater than 100%, that typically means that fund manager has churned the portfolio once over, completely," said Mahesh Patil, co-chief investment officer, Birla Sun Life Asset Management Co. Ltd. However, almost all experts we spoke to agreed that what constitutes a high or low portfolio turnover is subjective.

As per the capital markets regulator Securities and Exchange Board of India’s (Sebi) guidelines, all fund houses must disclose their portfolio turnover twice a year. Many fund houses do this every month.

One of the reasons why portfolio turnover ratios could be high is because the fund manager changes strategy midway. Motilal Oswal MOSt Focused 25 Fund’s turnover ratio was 104% for the year ended March 2017. In 2014, the scheme underwent a small change in strategy. Instead of focusing on the 200 largest companies by market capitalisation, the scheme restricted its focus on the 100 largest companies (to the tune of 65% of the portfolio). “The turnover may seem high but as we had changed our portfolio strategy, some stocks over a period of time had to go out," said Siddharth Bothra, senior vice-president and fund manager, Motilal Oswal Asset Management Co. Ltd.

Such changes can either occur when a fund house takes stock of its funds—as part of an internal exercise—or they can happen when two fund houses merge. In 2016, DHFL Pramerica Asset Managers Pvt. Ltd bought out Deutsche Asset Management (India) Pvt. Ltd. Two of DHFL Pramerica’s large-cap oriented schemes—DHFL Pramerica Diversified Equity Fund and DHFL Pramerica Large-cap Fund—have a turnover of 273% and 142%, respectively, as on the year-ended March 2017. “As a result of the merger, there was a change of fund manager, which necessitated some higher turnover but it will come down progressively in the next few months," said E.A. Sundaram, chief investment officer–equities, DHFL Pramerica. Typically, when a new manager comes in, he tries to align the portfolio to reflect his thoughts, and likes and dislikes; so some changes are inevitable.

Typically, smaller funds tend to have large turnover ratios. Of the 24 funds with a turnover of more than 100%, 11 had a corpus size of less than Rs100 crore each.

Then, there are funds whose strategies call for higher turnover ratio. Similarly, schemes that follow a value investment philosophy are expected to have lower turnover. Birla Sun Life Pure Value Fund (BPVF) has bucked this trend and sported a turnover of 118% for the year ended March 2017. Mahesh Patil, co-chief investment officer, Birla Sun Life Asset Management Co. Ltd, said this is inevitable as it is a result of the scheme’s strategy. Patil said that once BPVF’s underlying holdings hit their target price, the scheme sells them. “For us ‘value’ is relative. It doesn’t just automatically mean a very low price-equity (P-E) ratio stock, like say when stocks are available at a P-E of 5 or 7 or 10 times and so on. It is not a typical buy and hold scheme," he said. Patil cited the examples of fast moving consumer goods sector where companies may not be available at single-digit P-E, but even a lower P-E scrip, relative to the broad market’s P-E, could become a value buy for BPVF.

Experts say that portfolio turnover is an important ratio, but shouldn’t be looked at in isolation. “What is an appropriate turnover, applies according to the situation and the markets we are in," said Shyam Sekhar, founder, ithought, a Chennai-based mutual fund advisory firm. Sekhar said that in current times, when equity markets have been buoyant, fund managers have done well, despite having turnover ratios “on the higher side". Most experts agree that there isn’t one number beyond which a turnover is said to be high. One reason behind a high turnover is also that mutual funds are not taxed when they buy and sell. If they are taxed, turnover would reduce.