Thanks for Visiting Mint
You seem to have an Ad Blocker on. Please turn it off in order to continue, or whitelist Mint
HOW TO TURN OFF AD BLOCKER
OR
REFRESH IF YOU ALREADY TURNED OFF THE AD BLOCKER
Home >Insurance >News >Best health insurance plans for you

Best health insurance plans for you

How do you buy a health insurance plan? If you just settle with the plan your agent sells or are happy knowing you have bought the cheapest plan, there is a bit of unlearning and a lot of learning in store for you. A health insurance policy packs in several features and caveats. To give you a ready comparison, we designed Mint Mediclaim Ratings (MMR), which was developed by SecureNow Insurance Broker Pvt. Ltd. The full ratings along with the methodology can be seen here:http://www.livemint.com/mintmediratings.

In the ratings, for family floater plans, we have considered two sum insured amounts ( ₹ 10 lakh and ₹ 20 lakh) and three age categories in each—eldest insured member is 35, 45 or 65 years old. For individual plans, the age categories are the same but the sum assured is ₹ 5 lakh. The newest edition of the ratings (July 2015) also includes individual plans of ₹ 5 lakh, ₹ 10 lakh and ₹ 20 lakh for a person aged 70 years.

This week, we spotlight individual policies with sum assured ₹ 5 lakh, where the person is 45 years old.

We also explain some of the important aspects that one should look at while choosing a policy. 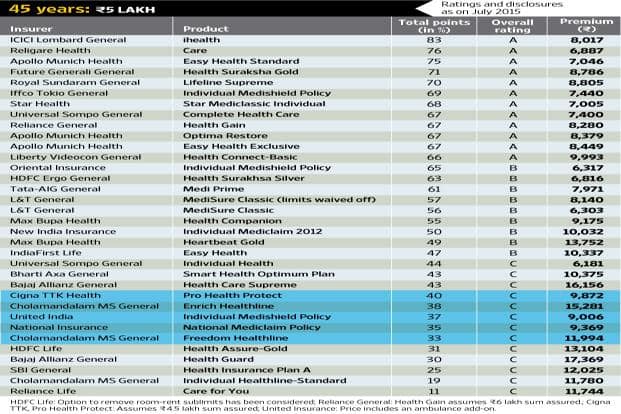 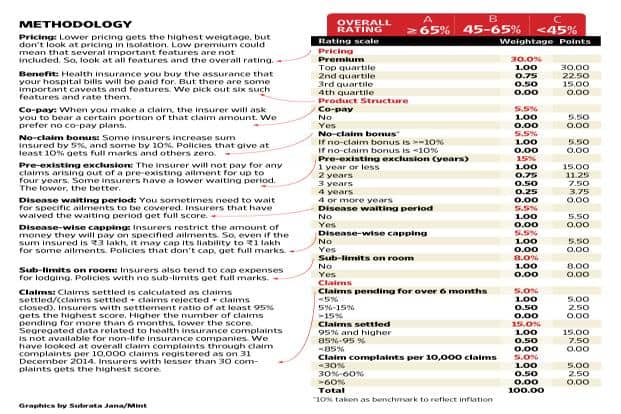 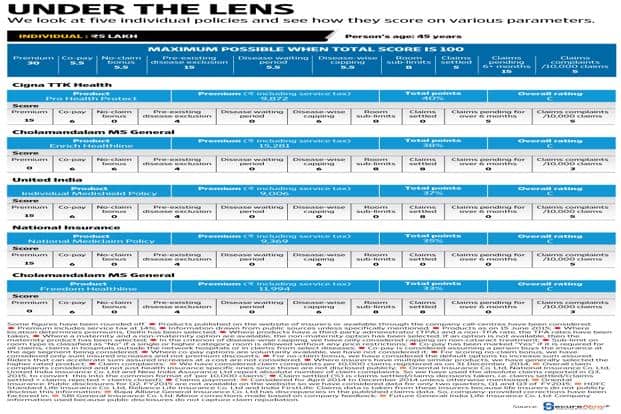