How badly has demonetization of rupee hit the Indian markets?

The S&P BSE Sensex is down 3.8%, which is more than more or less all other Asian emerging markets

At the time of writing, the Indian markets have fallen a bit more than other emerging markets in Asia. The S&P BSE Sensex is down 3.8%, which is more than more or less all other Asian emerging markets. The possibility of a Donald Trump win is keeping markets on the edge worldwide. The extra fall in the Indian markets compared to others could be due to many factors, including high valuations, but it’s very likely that the demonetization effect is mainly responsible for the fall.

That is clearly seen if we dig a little deeper. The Sensex is made up of very large companies which may not be impacted as much by the demonetization process. BSE’s mid-cap and small-cap indices have fallen by over 6% each at the time of writing. And in truth, the largest impact of the government’s move will be in the unorganised sector, which isn’t represented in the markets. 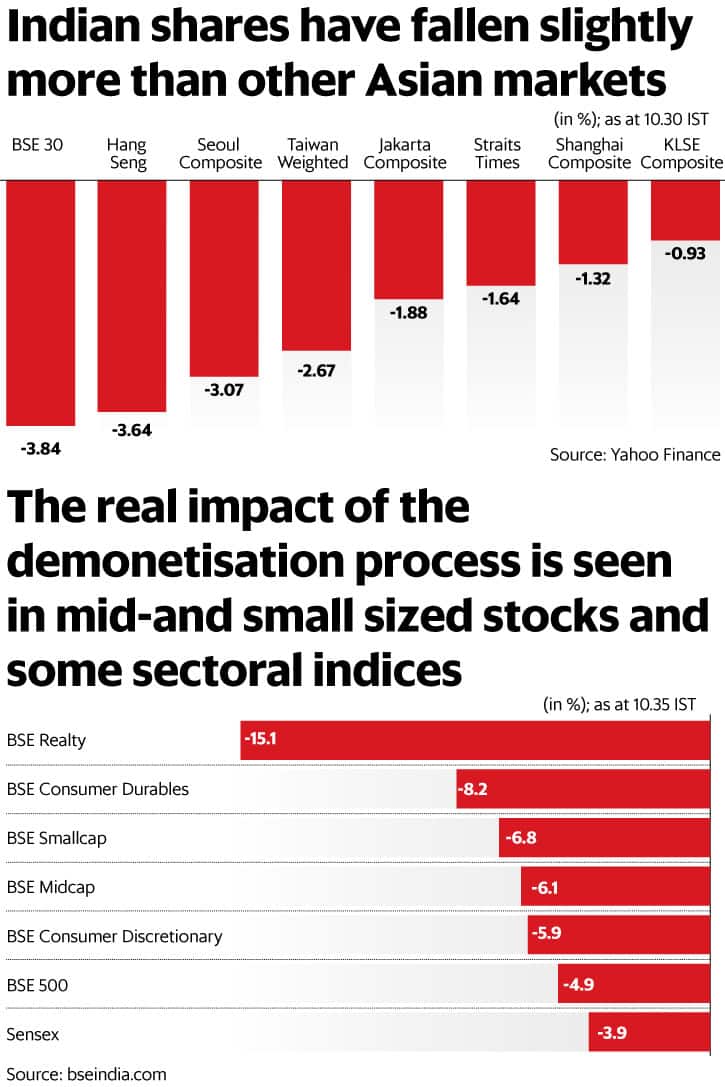 The true picture is reflected in sectoral indices such as the BSE Realty index, which is down as much as 15% at the time of writing. Some stocks such as DLF Ltd are down nearly 20%. This industry is known to entertain cash transactions of large magnitude. Similarly, stocks of jewellery companies such as Titan Industries Ltd have fallen by around 11% as well, perhaps because a lot of gold purchases are through cash. Besides, stocks of mid- and small-sized finance companies which collect payments in cash have fallen by 8-10%.

Information technology stocks, for now, are down around 3%, which is more or less in line with the broad markets. While these companies will be unaffected by the demonetization process, this reflects a concern about a Trump presidency and a possibility of anti-outsourcing measures.