Will the gross domestic product (GDP) numbers, scheduled to be out on Thursday, signal the long-awaited, much-anticipated, yet elusive recovery? GDP growth, at constant prices, has steadily declined every quarter from the eye-popping 9.1% reached in the March 2016 quarter to a tepid 6.1% in the March 2017 quarter.

Gross value-added (GVA) growth has followed a similarly unimpressive trajectory. Just as businesses were recovering from demonetisation, the goods and services tax (GST) led to another bout of disruption, which will be a dampener for the June quarter. Are there offsetting factors?

Here are a few pointers to the GDP print on Thursday: 2) Central government expenditure was up a sizable 27% in the June 2017 quarter compared to a year ago (Chart 2). Simply put, the government provided a strong boost to GDP in the June quarter. 3) Central government capital expenditure increased by a hefty 39.5% in the June 2017 quarter. But government capex is not enough to move the needle.

4) The Index of Industrial Production was higher by 2% year-on-year in the June 2017 quarter, compared to 3.1% in the March quarter. The index for capital goods was negative in the June quarter. Capital formation is, therefore, unlikely to have contributed much to growth.

5) There’s been major destocking in the manufacturing sector, chiefly in petroleum products, but also in the consumer goods sector. That will mean lower gross capital formation.

6) The base effect should result in agricultural growth being lower than in the March quarter.

7) The Centre for Monitoring Indian Economy (CMIE) database shows that operating profits for the corporate manufacturing sector were down 16.8% year-on-year for the June quarter (Chart 3). Taking this as a proxy for value added, manufacturing GVA growth should be affected. 8) The CMIE database shows that the operating profit of services companies (other than financial services) fell by 1.9% in the June quarter. Nevertheless, that’s a big improvement over the March 2017 quarter results for this sector. That provides clues for services sector GVA.

9) Growth in profit after tax, net of exceptional items, was much lower for financial services companies in the June 2017 quarter, compared to the March quarter.

10) What about consumption growth? Growth in operating profits of consumer goods companies has been better in the June than in the March quarter, according to the CMIE database. It’s worth remembering though that many consumer goods companies are not listed and hence not in the database. Companies in wholesale and retail trade saw their aggregate operating profit fall from a year ago.

11) The trade balance has worsened for the June 2017 quarter compared to a year ago. That indicates the external sector is going to be a drag on growth.

12) Take a look at what the Reserve Bank of India’s (RBI’s) professional forecasters have to say (Chart 4). The latest RBI survey was conducted in July 2017, so it’s likely they have revised their forecasts lower, as the full extent of the GST disruption has become clearer. Bear in mind, though, that this GDP series has a remarkable ability to surprise and confound forecasters. 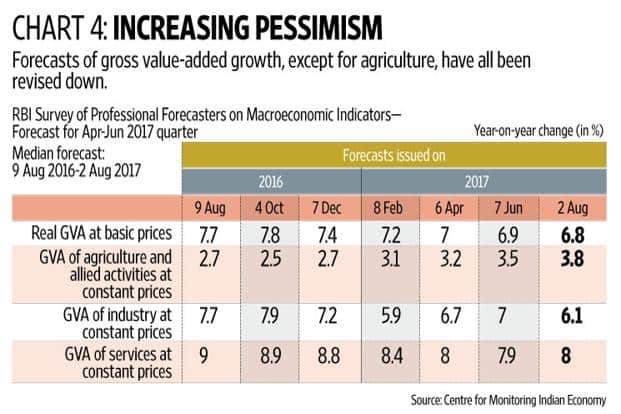 The GDP data will tell the RBI monetary policy committee whether their fears of slower growth are indeed true and will therefore be an important factor in deciding whether to cut interest rates further.

For the markets, which have been rallying on a heady cocktail of faith and liquidity, better-than-expected numbers will be an excuse to push markets up, while a worse-than-expected print could lead to a lurch downward, before the data is hastily dismissed as backward-looking and irrelevant.