GST: Not taxing sale of old gold jewellery could lead to tax evasion

Given India's fetish for gold and an increased tax rate of 3%, there are concerns GST will boost gold smuggling as both seller and buyer may be tempted to transact without a receipt

The finance ministry has clarified that selling old jewellery won’t attract goods and services tax (GST). According to the finance ministry, sale of old jewellery to a trader cannot be taxed as it is not a transaction made in the course of running a business. Also, since sale of old jewellery is not the business of the seller, the transaction cannot be taken as a taxable supply of the item. However, if an unregistered supplier of gold ornaments sells it to registered supplier, reverse charge will apply, it added.

Nearly 75% of the Indian gold jewellery market is unorganized and smaller players are struggling with the new tax regime, given the additional compliance burden, tax experts said. In such a scenario, this clarification does come as a relief for the sector; however, a worry now is that it could lead to jewellers not reporting such transactions and not recording either the purchase or sale, they said. 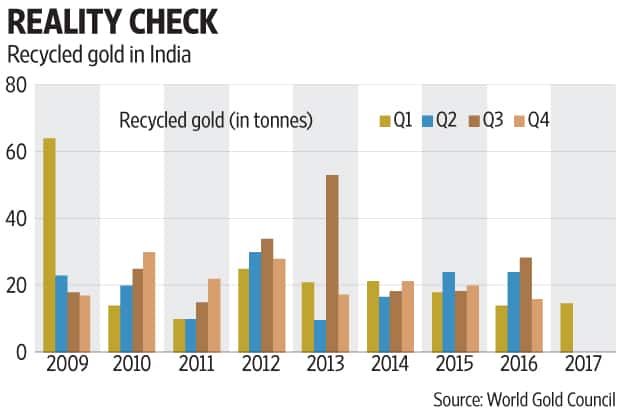 “Gold is one sector where tax evasion is likely to rise in the GST era. Simply because the supply chain is small and there are loopholes using which tax payments can be avoided. There are three ways in which gold can be procured. By importing it via a legal channel, through purchase of old gold from an unregistered seller, and smuggling. If an unregistered individual is selling his old gold jewellery, there is a tax exemption on it. So, the gold jeweller can import gold through illicit channels and show that in his books of accounts as purchase of old gold and evade tax," Sachin Menon, partner and head, indirect tax at KPMG in India said.

Sharing a similar concern, M.S. Mani, senior director-indirect tax, Deloitte Haskins & Sells LLP said, “While it is not possible to avoid reporting sale of jewellery made from fresh gold bars, it is not clear whether there is any reporting requirement on old jewellery exchanged by a customer."

Apart from tax evasion, another drawback of not taxing such transactions is that it could hinder the anticipated shift to the organized sector, tax experts added.

The total recycled gold in India in 2016 was 81.9 tonnes, shows World Gold Council (WGC) data (see chart). According to WGC, recycled gold refers to sale of old gold jewellery in return for cash.

To conclude, given India’s fetish for the yellow metal and an increased tax rate of 3%, there are already concerns that GST would boost gold smuggling since both seller and buyer are likely to be tempted to transact without a receipt. And now, with this move, it seems the government has accidentally given access to a route which can be exploited to escape tax.