"storyDirectUrl"
OPEN APP
Home >Market >Mark-to-market >Pharmaceuticals: In relief to investors, the worst may be over

Pharmaceuticals: In relief to investors, the worst may be over

While it does appear as if the worst is behind the pharmaceutical sector, the recovery is not going to be rapid and companies have a long road ahead of them

The pharmaceutical sector has had it tough so far in 2018. Since 1 January, the S&P BSE Healthcare Index is down sharply. The March quarter results did not bring a sigh of relief to investors but there were no horror stories playing out either. It does appear as if the worst is behind it, with the domestic market recovering and companies saying that price erosion in the US market is slowing. But the recovery is not going to be rapid and companies have a long road ahead of them.

Sales growth in the domestic pharmaceutical market has been reviving. In the March quarter, the domestic market reported 8.7% growth according to sales data from AIOCD Awacs, which is healthy considering that the year ago quarter reported 8.1% growth. Its growth was higher compared to that reported in the earlier three quarters. Growth was volume-led as well.

In the US market, the major companies who continue to face regulatory compliance issues did not have any positive news to give. They continue to take remedial steps or engage with the regulator and expect developments to happen in the rest of FY19. 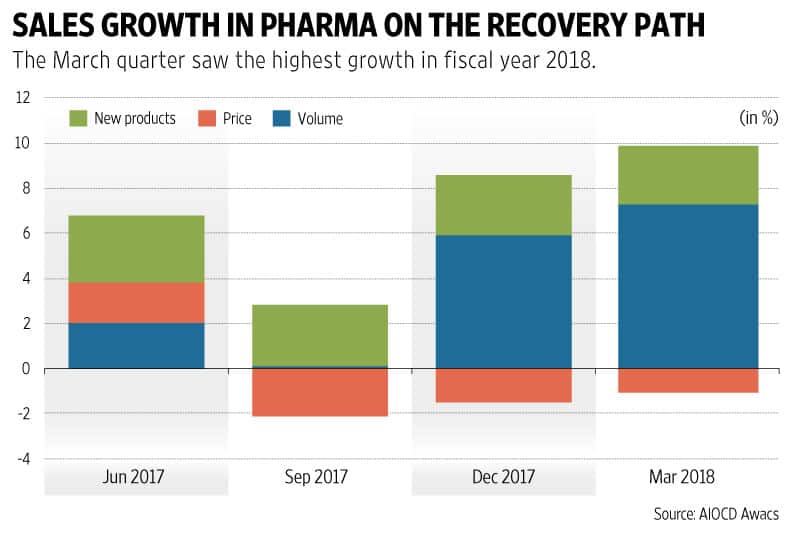 The good news, if you can call it that, is price erosion coming down from the double-digit levels it had reached to more manageable single-digit price erosion. The steep erosion in prices has led to competitors exiting products that are not viable. Indian companies too are taking a hard look at their portfolio to rationalise it. This will play out in FY19. Their focus will be on speciality products and companies have begun to announce launches from their speciality portfolios.

In addition to focusing on their sales mix, companies are equally intent on lowering costs. This becomes important as many of them are investing in creating a marketing setup in the US to support their speciality product launches. Apart from operating costs, companies are also targeting the research function, and have talked about focusing on select candidates.

After a tough year in FY18, it does seem that FY19 will see the bad news recede. Still, there could be policy bottlenecks investors will watch out for both in India and abroad, especially on the drug pricing front. Also, while the worst may be over, investors will want to see the pace of the recovery to assess if it warrants a relook at valuations.