What the past 6 bull runs tell us about this market

While we boast of one of the oldest exchanges in the world, the recorded history of Indian capital markets is limited. With the opening up of the Indian markets to foreign institutional investors (FIIs) in 1993-94, Indian market cycles have become strongly correlated with global equity markets. Over the past few months, aided by a strong electoral outcome, local enthusiasm for equities has recorded a sharp rebound, with analysts and market experts predicting a multi-year bull market. This would depend largely on two critical factors—sustained earnings growth and favourable global conditions—based on an analysis of the six largest bull market rallies of the past 30 years.

While India can boast of having the second oldest exchange in the world, data and analytics clearly lags that in the US. The Dow Jones Industrial Average index has a history of over 119 years, while the more ‘scientific’ S&P 500 was created in 1957. In comparison, the Sensex was developed in 1979 and the Nifty only in 1995. Data on the markets is available with some depth only from the 1990s.

The first recorded bull market would be the one in 1985-86. With the rise of Rajiv Gandhi, after the assassination of his mother, and the thumping majority given to the Congress, the initial round of reforms started by the previous government were taken ahead boldly. A charismatic finance minister, V.P. Singh, a set of sensible reforms—long-term fiscal policy for the Union government, rationalization of excise duties—and the feel good persona of the young prime minister backed by a dramatic improvement in growth, which was, unfortunately, an import-led consumption, drove the markets upwards. But the Bofors scandal shook India’s confidence. The markets gave up most of the gains post-1987. This was the first recorded bull market in the Sensex, before which, the index had been moribund for years. Unfortunately, little if any data is available on stock and sector movement during this uptrend.

The next bull cycle was again ignited by a new government, when the Congress returned after three years of coalition politics. The historic budget of 1991 was the underpinning of this skyrocketing uptrend. The Sensex was to shoot up 578% in less than two years, and a minority government desperate for legitimacy, while injecting harsh reforms was willing to use the stock market as the barometer to get approval for its policies. Unfortunately, as it turned out, the rally was largely financed by breaking into banks’ vaults—literally! The magnitude of this uptrend was such that it would keep equity returns negative for almost a decade. It was only in 2005 that we crossed the 1992 peak. This rally created overnight crorepatis and Harshad Mehta became a byword for equity investors. Bhav copies were sold at a premium and companies rushed to get listed. Even after the scam broke out, the markets rallied briefly in August-September 1992, before flaming out over the next two years. During this frenzy, sectors such as cement (remember ACC Ltd?) and metals led the charge. The market price-earnings (P-E) ratio at the peak of 1992 was an astonishing 60 times. By 1994, the market had given up over 70% from the 1992 peak levels and a considerable number of investors and speculators were left holding paper with little or no value. 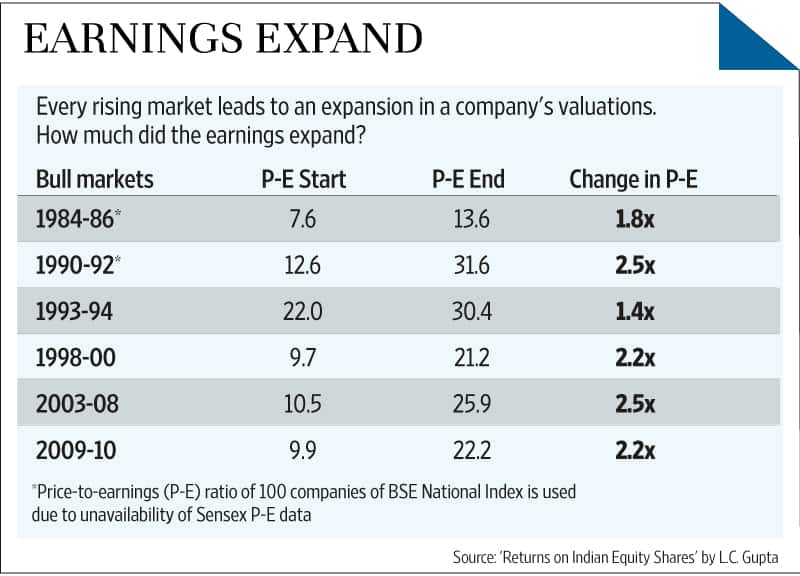 With FIIs being allowed to invest in Indian equities and the global depository receipt (GDR) market opened to Indian companies, a new uptrend was ignited in 1995, best known for initial public offerings (IPOs) and GDRs. Private sector mutual funds had just been allowed entry. But even a boost from the “dream budget" presented by P. Chidambram in 1997 could not sustain this rally.

A contagion spread across the Association of Southeast Asian Nations (Asean) economies, led by the surprise devaluation of the Thai baht. Indian markets were further affected by the musical chair at the Centre—three governments in four years.

Internet set the foundation for the next uptrend. While the US was in the mid of an Internet bubble, India reflected this through the Y2K scare. The fear of Y2K gave Indian software services companies an opportunity to enter global markets. If China got the manufacturing boom of the 2000s, we got the software services boom. While Armageddon predictions of Y2K died a quiet death, it brought to the fore a new business model—offshoring.

Within a period of less than 24 months, the BSE IT index chalked up over 1,000% return. The scale of market capitalization gains for information technology companies was so significant that during this period, from no weight in the Sensex, it peaked at over 30% weight by February 2000. The rally was vicious and narrow, with all the ingredients of collapsing, which it did. Beset with poor domestic economic macro variables, the markets went into a tailspin.

A slow curation of the Indian economy after the tech bubble burst set the foundation for the only bull market that Indian investors have experienced. At the start of 2003, the level of disbelief in equities was unmatched. After the binge of late-1990s, Indian companies got down to the serious and painful process of cutting flab. Alas, only a few, if any, investors were available to profit from this. With mouth-watering valuations, and interest rate and inflation at historic lows, what was required was a confluence of global factors to give the additional boost.

Alan Greenspan indeed lowered the interest rates in the US. Boosted by Chinese manufacturing, global prices of manufactured products fell at a pace never seen earlier. A result of this was that core inflation in developed economies fell dramatically, inducing further rate cuts and building greater risk appetite.

For Indian investors, the 2003-08 rally re-ignited their faith in equities. The rally was across the board and equities were back. The rally in infrastructure sector rivalled the technology “bubble" in intensity, though it was longer and thus considered more stable. Yet this was not an India specific rally; Brazil, Indonesia, China, Turkey also climbed to all-time highs. And like all equity booms, this one, too, ended spectacularly, questioning the very existence of the banking model that had financed the unprecedented boom in global equities. However, the advent of quantitative easing by the then US Federal Reserve chief Ben Bernanke, and its further extensions, brought forth a frothy return to the markets in March 2009. In India, the markets got a boost when the United Progressive Alliance (UPA) was re-elected without the support of Communist parties. 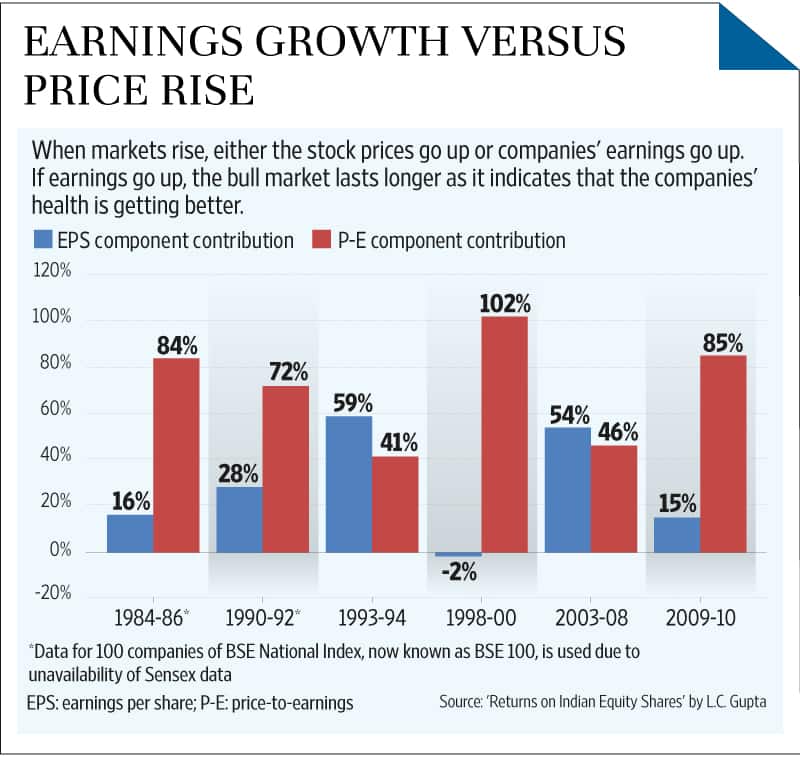 Indian equities swung back with a vengeance. India was among the first few countries that scaled back to 2008 peaks. However, macro variables were deteriorating and reforms were lesser than expected. The markets, too, became polarized.

Defensive sectors, which are traditionally dependent on domestic consumption, grew manifold, while high beta sectors such as infrastructure declined. Public sector companies was another segment that saw a steep decline. It appeared as if investors had used these as a proxy to show their displeasure towards government inaction.

This brings us to the current stage, a 12-month-old uptrend, which several analysts have predicted to be a multi-year bull market. Will it be so? Given the Lok Sabha election mandate, Narendra Modi’s track record and the current stage of economic cycle, several experts claim the onset of a new bull market, one which would not only rival but exceed the 2003-08 bull run.

The advantage of knowing the past is that it gives us a glimpse of how it happened then. Going by experience, the following factors are required to unfold for a rally to get converted into a bull market. One, a sustainable earnings growth for over three year period. This is a critical factor. What differentiated the 2003-08 bull market from the other rallies was the sustenance of earnings growth, which was over 26% during the bull run. Second, favourable confluence of global factors in terms of liquidity, risk appetite and stable growth.

The message for investors, in brief, is: The markets are well poised to benefit from a period of double-digit earnings growth, the magnitude of which may not rival the 2003-08 period earnings growth. The global factors, too, are not as benign as they were earlier. Hence, while the odds favour equity as an asset class, do not expect a repeat of the 2003-08 bull market returns. Keep this in mind and then board the ‘Indian Equity Express’.