In June, five industry groups showed contraction. In May, as many as eight groups had contracted.

Indian industry has clearly recovered from the slowdown induced by the credit crunch that resulted from the collapse of Lehman Brothers Holdings Inc. The recovery has been led by demand for consumer durables, which grew 16.5% in April-July over the same period of last year. In contrast, the production of capital goods was only 2% higher during April-July. 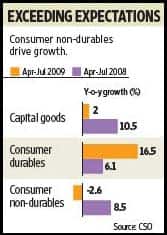 Will the momentum continue? The August Purchasing Managers’ Index (PMI) data shows a pause and the finished goods stock sub-index contracted during the month, indicating that manufacturers were running down inventories.

“Manufacturers had built up stocks during earlier months, which led to a sharp rise in industrial production. But now they are de-stocking," said Gaurav Kapur, senior economist with ABN Amro Bank.

On the other hand, the IIP fell in August and September 2008, so there will be a positive base effect. In fact, the base effect is likely to get even more pronounced because we are now entering a period when industrial production took a nose dive last year. The base effect will be very favourable because manufacturing growth was 0.9% in Q3 and contracted 1.4% in Q4 of the fiscal year ended 31 March.

The current concerns include negative growth in non-oil imports; low credit growth; high food inflation; continuing contraction in exports; the drought; and the fact that, despite all stimulus measures, private consumption growth was a tepid 1.6% in the first quarter and it was only net exports that helped raise GDP growth.

To be sure, the buoyant markets are helping firms raise money. One reason for the low credit growth is that firms are getting their funds from the markets. Data on external commercial borrowings from the Reserve Bank of India indicates that project imports should soon pick up. The PMI data shows the services sector is recovering faster than manufacturing.

Also, as in 2002-03, government support may mean that despite the drought, consumption may not be badly affected. And, with the revival of the developed economies, export growth can only go up from the current depressed levels.

The Organisation for Economic Co-operation and Development (OECD) said on Friday: “OECD composite leading indicators (CLIs) for July show stronger signs of recovery in most of the OECD economies. Clear signals of recovery are now visible in all major seven economies, in particular in France and Italy, as well as in China, India and Russia."

What about interest rates? Some analysts have started to argue that bond yields have gone up too fast and they may now start lowering. Sujoy Das, head of Fixed Income at Bharti AXA Investment Managers Pvt. Ltd, said: “Since the market yields had primarily hardened due to excess government security supply and now the government borrowing programme is expected to taper off (with 64% of the borrowing programme expected to be completed by the end of the month), there is a possibility of yields softening from the current levels."

Similarly, the spread between the repo rate and the 10-year government bond yield has averaged 70 basis points over the last five years. Currently, this spread is 260 basis points. Das argued that even if RBI tightens its monetary policy, it will do so by around 25 basis points or so.

Moreover, at the moment there are no chances of banks increasing interest rates because their incremental credit deposit ratio in the last month has been a mere 4%, down from a low 20% in the previous month.

In short, while there are many reasons why we won’t have a V-shaped recovery, there are also grounds for believing we could be positively surprised.