Thanks for Visiting Mint
You seem to have an Ad Blocker on. Please turn it off in order to continue, or whitelist Mint
HOW TO TURN OFF AD BLOCKER
OR
REFRESH IF YOU ALREADY TURNED OFF THE AD BLOCKER
Home >Market >Mark-to-market >Is Bajaj Auto losing the game in motorcycles on home turf?

Is Bajaj Auto losing the game in motorcycles on home turf?

For Bajaj Auto, it's worrisome that even its recent motorcycle launches, to stage a comeback in the domestic market, have not helped much

Bajaj Auto Ltd may boast about being the world’s third-largest motorcycle manufacturer, but the fact remains that it has lost out to competition on domestic roads.

March sales numbers finally nailed it for fiscal year 2018 (FY18). The 5% growth year-on-year during the month closed FY18 with a 1% sales contraction in motorcycles on domestic roads. Fortunately robust exports gave a leg-up to total sales for the year, which were 5% higher year-on-year.

The pathetic performance stands out as motorcycle and two-wheeler sales as a whole zoomed for all its peers. 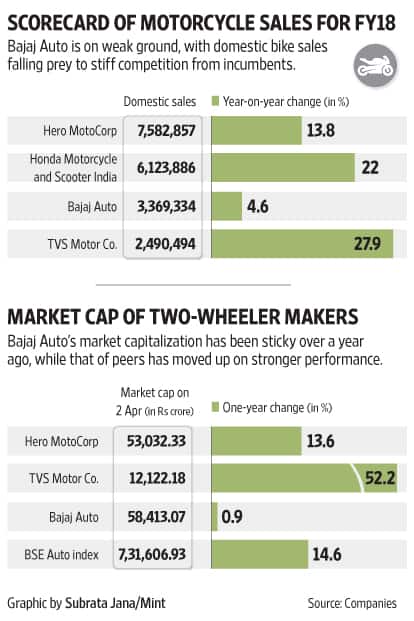 In the listed space, Hero MotoCorp Ltd’s highest-ever monthly sales in March propelled its annual sales record up by 14% from the year-ago period. Even TVS Motor Co. Ltd, which was a laggard for a long time in the comparable space, turned out a stellar 26% annual growth in motorcycle sales. The firm excelled in scooter sales that shot up by 30%. The unlisted entity and hero among two-wheelers is Japan’s Honda Motorcycle and Scooter India Pvt. Ltd, which also clocked a 22% annual sales growth for the year.

Perhaps a year of faltering sales may not be worrisome for a firm of Bajaj Auto’s size and stature. However, subdued sales growth in single-digits for the last two fiscal years before which it contracted for about two years had already made investors cautious.

What’s worrisome is that even its recent motorcycle launches, to stage a comeback in the domestic market, have not helped much. In fact, the company lost market share from 26% in FY12 to 18% in FY17. This was when Honda Motorcycle doubled its share to 14%, when the other two fought tooth and nail to maintain share if not grow.

According to Bharat Gianani, analyst at Sharekhan Ltd, “One of its failings is the market share loss in the entry level and executive motorcycle segment. Its Discover brand took a big hit, while other brands too could not help retain market share."

Besides, most two-wheeler manufacturers that are banking on the mass segment forayed into scooters to cash in on the growing urban youth segment. At a time when scooters grew at a faster rate than motorcycles, Bajaj Auto was not present in the segment.

While dealers say that discounts are being offered on some products, brokerage firms are cautious about forecasting growth estimates for the next year because of tepid response to Bajaj Auto’s recent launches. Will initial volumes sustain is the question. The FY18 sales numbers were a disappointment and even its monthly domestic sales run rate fell significantly short of expectations.

Obviously, this has and will continue to take a toll on investor perception of the stock, which has underperformed peers and benchmark indices. No wonder Bajaj Auto’s market capitalization has been stagnant over a year, while the rest have expanded.

With cut-throat competition in the domestic markets among manufacturers to gain and retain market share, a climb up with its existing vehicle range would be tough for Bajaj Auto. And efforts to keep pace with peers would tell on costs and weigh on profitability, unless exports and its leadership position in three-wheelers offset these problems.