Increase of 20% from the previous year's rate

Insurance Regulatory and Development Authority (Irda) has increased the third-party premium rates for motor vehicles for financial year (FY) 2015. Motor third-party liability insurance covers expenses in case of damage by your vehicle to life or property of a third person. The premium for this kind of insurance cover is controlled by the regulator and not the insurance companies.

Every year, Irda calculates fresh third-party motor premiums depending on certain parameters such as average claim amounts, frequency of claims, expenses involved in servicing the motor third-party business and cost of inflation index for the year of review.

For other motor insurance covers such as own-damage cover, which covers damage to car, the premium is decided by the insurer. Read on to find out how much more you now have to pay for third-party insurance.

“For two-wheelers, the increase has been about 10%, and for other vehicles, it is in the range of 0-10%," said Sanjay Datta, chief, underwriting and claims, ICICI Lombard General Insurance Co. Ltd.

In fact, the draft regulations that Irda had released in February for public discourse suggested a far steeper increase—in the range of 25-137%, with smaller cars of less than 1,000cc due for the highest jump. 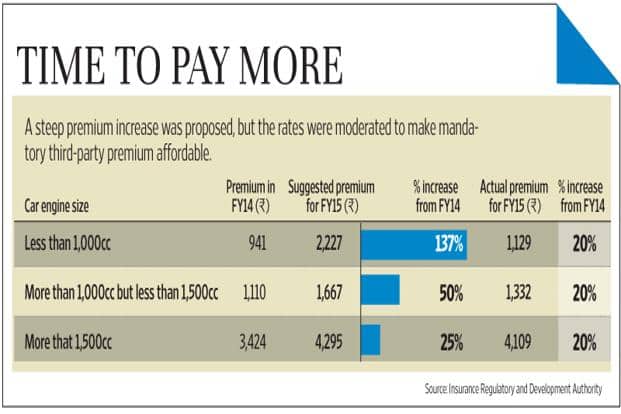 “Irda collected data from the Insurance Information Bureau (IIB), and my sense on that data is that small cars have become dominant in the overall population of cars. These are also becoming more powerful, and a regular mode of transport, but still lack some of the essential safety features," said Rakesh Jain, executive director and chief executive officer, Reliance General Insurance Co. Ltd.

However, taking into account the comments from consumers who were against a steep rise, Irda did not go ahead with the quantum of increase it had mentioned in the draft guidelines. “Looking at the sudden and adverse impact that such an increase in rates would have on the policyholders and considering the comments on exposure draft, the Authority decided to moderate the increase in rates," said the circular dated 27 March.

“Third-party premium in private cars constitutes only 15% of the total premium that a customer pays towards a comprehensive car insurance policy (that includes own-damage cover). So, the hike in third-party results in a hike of 2-3% in the overall premium, which is not much. But in the case of commercial vehicles, where third-party is the major chunk of premiums, a hike has a direct impact. The regulator has tried to balance the effect," said Datta.

Insurance companies have been asking for a hike in third-party premium primarily because their third-party portfolio has been a loss-making one, and unlike other insurance policies, the risk on the insurer is unlimited. For instance, in life insurance, the liability of the insurance company is limited to paying the sum assured, which is decided at the outset. In home insurance, again, there is a sum insured or an insurance cover that defines the liability of the insurer. But in third-party insurance, the liability is unlimited. In case of an accident that causes bodily injury or loss of life, there is no set amount of third-party cover; the entire compensation is borne by the insurer. The court decides the amount of compensation, taking into consideration the earning capacity and age of the injured or deceased person. Third-party cases are fought at motor accident claims tribunals. In case of damage to property, the maximum liability is limited to 7.5 lakh.

“The hike in premium is very modest. Last year, the average hike was about 17% and this year it’s been about 10% (in the overall portfolio of third-party premium which includes cars, two-wheelers and commercial vehicles). The General Insurance Council had proposed a hike of 50-60%, so, in that sense, there is still a gap. Insurers are bleeding from the losses of third-party insurance in the past and we also have to keep pace with the court awards which are only increasing," said Jain.

Given that premiums have been moderated despite the industry asking for a sharp increase to match the liability, Irda has directed the insurers to make sure that third-party cover is available at their underwriting offices, requests for insurance are processed expeditiously and policies are issued promptly.