BSE inches closer to an IPO; but alas, what timing!

BSE investors will rue the delay in the listing process. In recent years, BSE's competitive position has weakened, and valuations may take a hit

Securities and Exchange Board of India’s (Sebi) new year gift to BSE Ltd was a circular dated 1 January that provided further clarity on listing of stock exchanges. BSE has been the most eager to list, and there are now hardly any substantial roadblocks to its listing plans. Its investors, however, will rue the delay in the listing process. In recent years, BSE’s competitive position has weakened, and valuations may take a hit.

One of the reasons for the delay in BSE’s listing was the regulator’s insistence that each shareholder in a listed stock exchange should be “a fit and proper person." It has now found a quirky, yet workable solution to ensure this—essentially investors have to make a declaration stating that they are fit and proper every time they purchase shares of stock exchanges.

A far better solution would have been to waive the requirement for shareholders that held less than 1% or 2% in an exchange. Instead, brokers and exchanges have to live with more paperwork and some changes in their software.

Regardless, the stalemate on listing of exchanges is finally over. BSE’s investors, in particular, should rejoice, albeit some of the excitement will be tempered by the drop in the exchange’s turnover in some key segments. In the equity derivatives segment, BSE’s market share has fallen to 2.5% from as high as 35% just a year ago. The exchange’s fortunes in the segment have been closely linked to the amount of incentives it doled out to its trading members. In October 2015, the exchange discontinued most incentives in single stock derivatives, and also sharply reduced incentives for trading in index derivatives. It has been gradually reducing incentives for some time now, as the chart alongside shows. But the latest adjustment seems to have made trading unviable for a large number of members. 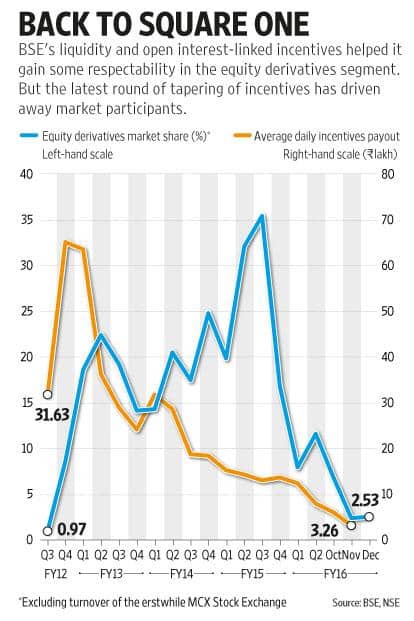 The exchange told Business Standard last week that it has realised that while its liquidity enhancement schemes helped increase turnover, open interest did not increase on its platform. And that as a result, it has decided to taper these schemes and focus instead on building volumes through other means. Note that BSE spent nearly 267 crore between September 2011 and December 2015 on its liquidity enhancement schemes for the equity derivatives segment. In short, it turned out to be a costly experiment.

Some of the exchange’s brokers and investors, however, are still supportive. They say that BSE’s equity derivatives segment was practically dead, and the liquidity enhancement schemes have at least made the exchange’s screens come alive. But they are just clutching at straws. The writing is on the wall—liquidity enhancement schemes haven’t given desired results. BSE’s reduced incentives—until the time they are continued—may keep the screens lit, but it will be too much to expect a serious investor to be impressed and accord the equity derivatives segment material value.

BSE’s performance in the equity cash segment has been slipping too. For top stocks such as Reliance Industries Ltd and Infosys Ltd, its market share has halved from around 16% five years ago to 8% currently. It has been well documented that in the trading world, liquidity draws liquidity. The National Stock Exchange of India, with an over 90% share in the trading of top stocks, is likely to attract even more trading interest. As such, the prospects for BSE are grim, unless it can think out of the box and execute well on its plans.

BSE has done relatively well in the currency derivatives segment although it must be noted that it barely charges any fees, when compared to the much higher trading fee charged by NSE. It remains to be seen to what extent volumes will stick when it raises fees. The experience in the equity derivatives segment suggests investors should exercise some caution while valuing this segment.

The bottom-line, of course, is how well or poorly the exchange has fared on profits. As pointed out earlier in this column, in the past five years, BSE’s stand-alone net profit has halved, to 101.44 crore in financial year 2014-15. And its consolidated net profit has fallen by a third in the same period to 155.5 crore. Due to the tapering of incentive schemes, the bottom-line may get a boost of about 25-30 crore; although the flip side is that investors stare at the scary prospect of a moribund equity derivatives segment.

All told, BSE’s competitive position has weakened in recent years, and investors would have been able to extract far greater value if an initial public offering had come earlier. Of course, regardless of the possible valuation hit, investors will be relieved that there is finally hope of finding an exit.