Hong Kong: Asian stocks edged higher on Monday as the Chinese premier’s positive assessment of the world’s third largest economy helped soothe nerves ahead of key earnings reports from leading US companies. European markets, on the other hand, opened lower.

Many Asian markets seesawed before heading modestly higher, led by Hong Kong and Shanghai stocks after Chinese Premier Wen Jiabao said on Saturday that the economy was faring “better than expected" as a massive stimulus package produces results. 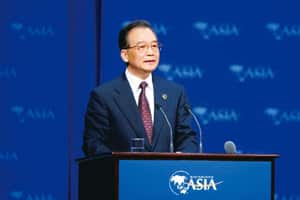 Investors were also awaiting results that could test a growing belief that the world economy and banking system have turned a corner.

Among the hundreds of US companies due to report earnings are Bank of America Corp., Coca-Cola Co., Microsoft Corp., International Business Machines Corp. and McDonald’s Corp.

So far, rosier-than-expected earnings from financial giants such as Citigroup Inc. and Goldman Sachs have buoyed optimism of a recovery and given further impetus to a six-week rally.

Still, with a number of markets already up nearly 20% in less than two months, many are becoming wary of another bubble in the making and say any negative surprises could cause a bout of selling.

“Equities markets are beginning to be quite detached from the underlying economic fundamentals—once again," said Kirby Daley, senior strategist at Newedge Group in Hong Kong. “The worst is far from over."

The euro fell against the dollar to its lowest point since mid-March as traders anticipated another interest rate cut from the European Central Bank.

Taiwan’s market was higher, though markets in Australia and Singapore retreated.

Wen said the economy appeared to be bouncing back, with industrial output, consumer spending and factory investment on the rise.

“China’s package plan is already paying off and positive changes have taken place in the economy," he said on Saturday at a forum in China. “The situation is better than expected."

Mainland investors were also encouraged after a Chinese regulator said bank lending this year would not be limited to the 5 trillion yuan (Rs37 trillion) the government has cited as a goal. A flood of liquidity in the market has been pushing up stocks since the start of the year.

Chinese airlines were among the day’s best performers, after tickets prices were raised on Monday following reports of heavy 2008 losses for state-owned carriers.

Bonnie Cao in Beijing and Tomoko A. Hosaka in Tokyo contributed to this story.