Palladium, which is mainly used to curb harmful emissions from gasoline vehicles, has rallied on expectations that supply will lag demand for a sixth straight year

In the main commodity markets, nothing has done better than palladium this year. The metal is up 30%, beating 33 other raw materials, including lean hogs and aluminum, tracked by Bloomberg. On Friday, prices surged as much as 7.9% to a 16-year high of $928.36 an ounce as some traders were said to scramble to get hold of physical supplies.

Palladium, which is mainly used to curb harmful emissions from gasoline vehicles, has rallied on expectations that supply will lag demand for a sixth straight year.

It’s now almost as expensive as platinum for the first time since 2001, helped by Volkswagen AG’s emissions scandal two years ago that has prompted consumers to switch from diesel to gasoline cars.

Rout in technology stocks biggest since 2008

This year’s hottest stocks, companies from Facebook Inc. and Apple Inc. to Netflix Inc. and Nvidia Corp., buckled Friday, spurring losses that sent the Nasdaq 100 to its biggest rout relative to the Dow Jones Industrial Average since 2008.

Friday’s losses were significant in the technology space. 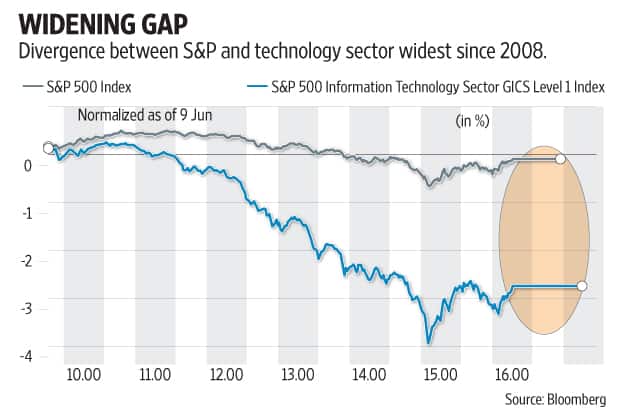 Within the S&P 500, technology shares also trailed the full index by the most since 2008 as investors took profit in an industry whose gains this year through Thursday had almost tripled the S&P 500.

Traders cited a rotation out of technology and into banks and energy, the biggest losers in 2017, driving those groups up at least 1.9%. Bloomberg

Crude oil falls for the third week as glut persists

Oil fell for a third week as rising supplies from the US to Nigeria to Libya showed that the Organization of the Petroleum Exporting Countries, or Opec, is still struggling to clear a global glut.

Futures fluctuated in New York Friday, trading at the sub-$50 levels seen before Opec first agreed to curb output in November. US data released Wednesday showed total crude and product stockpiles rose by the most since 2008 last week, surprising a market that had been expecting further declines. American output is also seen surging in 2018 to a record above 10 million barrels a day. In Nigeria, Royal Dutch Shell Plc lifted restrictions on exports of a key grade halted for more than a year. Bloomberg