Check resale value before you buy a new car

As the aspirant mass affluent chase the Indian dream, they change their cars every 5 years. Check to see what your new car can sell for 5 years later

If you are the typical value-for-money-seeking Indian buyer, then you surely worry about the resale value of your new car, which you may want to sell in a few years. The urban, mass-affluent car buyer today replaces his car almost every 5 years, so the resale value league charts could be a deal breaker, specially when the average period of car ownership is falling.

So, here is a user’s guide to buying a car—other things being equal—according to the best resale value. But before that, let’s find out what impacts the future resale value of your vehicle. This can also help you determine, which pre-owned car to buy, if you choose to buy one instead of a new car.

“The biggest factor is age of the vehicle, followed by kilometres driven," said Kumar. The model itself and the current demand of particular models also make a difference, he added. “There would be a lot of city-specific factors, such as the diesel issue in Delhi," he said.

The newer the car, the better. The less driven, the better. Of course, nobody wants a car that’s been in a bad accident and dented-painted over.

What about models? Dhruv Chopra, chief marketing officer at CarWale.com, said that “people movers" such as Toyota Innova and Maruti Suzuki Ertiga command the highest resale value, because of demand from the commercial and taxi segments. “If they can get a one-year-old vehicle for 90% of the ex-showroom value, they will take it as...they are anyway going to use the vehicle heavily," Chopra said.

Sometimes, a particular model becomes very popular. “Ford EcoSport is quite a surprise; it holds a good resale value. Part of that is due to the fact that there is more demand for that car than Ford can currently meet. People still have to wait for 4-6 weeks before they can get one," Chopra said.

Fuel of the car is also a big factor in the pre-owned market. Vehicles like Innova and Ertiga, which are loved by the commercial segment, are sought after only if they have a diesel engine. And the reverse is true for the commuter segment. A petrol- or CNG-driven Maruti Swift is in higher demand than the diesel version because it is cheaper to buy and maintain.

Then comes the overall cost of ownership. “Maruti and Hyundai have a reputation of being economical to maintain. So, they are popular and command a high resale value," Chopra said. 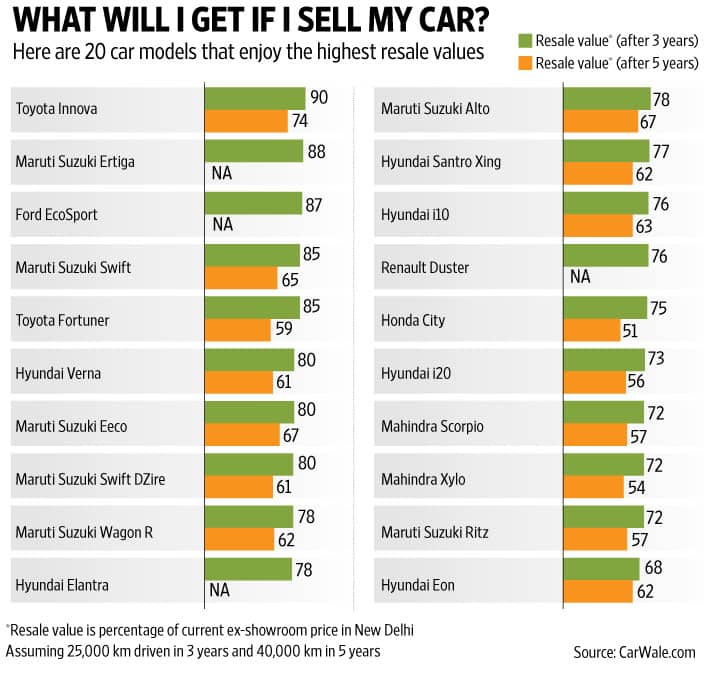 What drags the resale value

The car manufacturers: Easy availability of a new car, and discounts from the manufacturer can also pull down the value of a particular model.

If a car model has been given a facelift recently by the manufacturer, with new features or a newer design, your old car of that model will suddenly be worth a little bit less.

“Honda City is a classic example. It has gone through major changes over the past 5 years. If you have a 5-year-old Honda City, the value suddenly falls as everybody wants the latest design and features in the car they see," Chopra said.

Similarly, launch of competing models can also pull down the value. Five years ago Mahindra Scorpio was among the top models in terms of resale value. Now, it has been left behind by Renault Duster in the used car market, Chopra said.

The demand for brands and models in the pre-owned car market is similar to their demand in the new car market. For instance, Kumar said, in terms of volume, Maruti Suzuki Swift, DZire and Alto are among the highest-selling cars even in the used car market.

According to listings on QuikrCars, the demand for models of old and new cars is similar. “Maruti and Hyundai are the top ones in demand, which is then followed by Tata, Mahindra and others," said Atul Tewari, head, QuikrCars.

Unlike in the past, where only the top brands like Maruti and Hyundai were trusted by used-car buyers, there is now growing acceptability of other brands as well.

Chopra said that Indian customers are evaluating particular models and not just the brands. “In Europe and the US, the brand plays a huge role in the resale value. In India, we value particular cars more than the brand." So, even though Maruti Suzuki can feel good about the sales numbers of Ciaz and A-Star, it cannot brag about the resale value of these cars.

So don’t look towards the West, even if you are buying a foreign car. Buy like an Indian. Consider the resale value as well when you buy a new car.