OTHERS : Mumbai: Indian shares extended gains for a second straight session on Thursday led by gains in heavyweights Infosys and Reliance. Positive trends in Asian and European stocks also boosted benchmark indices BSE Sensex and NSE’s Nifty 50. However, a drop in shares of bank and financial services companies halved gains. The expiry of monthly futures and options contracts also added volatility.The BSE Sensex closed 157.34 points, or 0.44%, up at 35,807.28, and the Nifty 50 ended 49.95 points, or 0.47%, higher at 10,779.80. Intraday, the Sensex 391 points to 36,041.24 and the Nifty 50 jumped 104 points to 10,834.20.The BSE micap and smallcap indices rose 0.3%. Among the sectoral indices on BSE, IT, energy, FMCG and teck advanced over 1%.Utilities, oil and gas, and power also rose. On the other hand, auto, metal, bankex, basic material and healthcare declined.Reliance, Infosys, NTPC, ONGC, Adani Ports and Tech Mahindra were among the top gainers on the key indices, whereas Hero MotoCorp, BPCL, Bharti Aritel, Tata Motors and Tata Steel were among the major losers.“Markets are currently dancing to the global tunes and we feel it’ll continue in near future, in absence of any major event on local front,” said Jayant Manglik, President, Religare Broking Ltd.“The market is likely to be focused on earnings, pre-poll alliances, rate decisions, union budget, government spending and global cues to make its moves in the first quarter of 2019,” Ridham Desai and Sheela Rathi, analysts at Morgan Stanley India, wrote in an investor note on Dec. 26.In global markets, shares in Europe and Asia traded mixed, while US equity futures tumbled. Oil prices fell over 1% after rebounding 8% in the previous session, as worries over a glut in crude supply and concerns over a faltering global economy.With inputs from Bloomberg

The growth in India’s broking industry is estimated to be in a range of 5% to 10% in FY2019, with revenue likely to stay at Rs 19,500-20,000 crore, according to ICRA. It said the market volatility could encourage trading turnover, but the recent corrections in valuations amid cautious investor sentiment would impact revenues.“The recovery in the first half of this fiscal was not broad-based and remained largely limited to the large-cap segment,” noted Samriddhi Chowdhary, vice president and co-head of financial sector ratings, ICRA. “The underperformance of mid and small-cap securities had a bearing on retail investor participation, particularly in the cash segment, with the investors yet to recoup their losses. The decline in delivery volumes in the cash segment also points towards the growing shift towards trading as opposed to investment-oriented transactions.”

Selan Exploration shares surged 12.74% to Rs 195.95 per share after the company said its board of directors approved shares buyback at a price of Rs 300 per share for an aggregate amount of Rs. 25 crore.

Sreeleathers shares traded 8.34% up at Rs 244.75 per share. Intraday, the stock jumped as much as 15.9% to Rs 261.95 per share. The company said that MD Satyabrata Dey’s statement regarding expansion of the company’s exclusive stores is his personal view and cannot be viewed as an official company statement. Dey told The Hindu Business Line that Sreeleathers is looking to expand its exclusive stores.

Watches and accessories maker Titan Co. Ltd is targeting a growth rate of over 20% in 2018-19, said managing director Bhaskar Bhat in an interview. The company also expects the 2019 wedding season to be stronger than 2018, which will help prop up the jewellery business, its biggest revenue earner.“The jewellery business had targeted 25% growth this year. It should be in that ballpark, maybe a little less than 25%. We lost out in the first quarter. Therefore, to make up will be a problem,” said Bhat. Jewellery, sold under the Tanishq brand, accounted for almost 80% of Titan’s total revenue in the July-September quarter, he added. Read more

Power Finance Corporation Ltd said the government intends to complete the proposed sale of its stake in REC Ltd to PFC by March 31, 2019. The company further disclosed that it had not agreed to a definitive pricing for acquiring the government’s stake in REC, and “the figures being discussed in various media reports are purely speculative in nature.” PFC shares traded 2.45% up at Rs 102.40 per share.

Anand Rathi Wealth Services Ltd, the wealth management arm of Mumbai-based financial services group Anand Rathi, said it has decided to withdraw its proposed initial public offering (IPO) and made an application in this regard to the Securities and Exchange Board of India (Sebi).“The business is doing extremely well and the company is witnessing unprecedented traction in its target markets. However, a large part of the IPO proceeds were in nature of offer for sale by the holding company, and in light of the difficult market conditions, the group has decided to pursue other avenues to raise the requisite funds,” said Amit Rathi, managing director of Anand Rathi Wealth Services Ltd. Read more

Vakrangee shares traded 1.13% up at Rs 35.65 per share. The company said it will launch over 3,300 Nextgen Vakrangee Kendras across India on 14 January.

Shares of IT companies traded higher today, with the Nifty IT Index rising nearly 2%. Shares of NIIT Tech, Infosys, TCS and Tech Mahindra rose 2% to 2.9%. 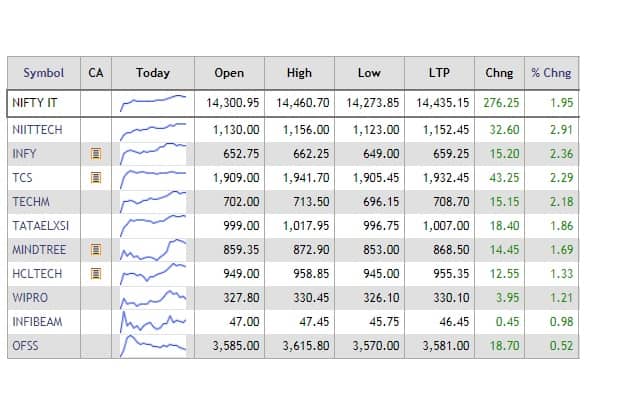 Suven Life Sciences Ltd shares jumped as much as 2.7% to Rs 227.85 per share after the company said it has received a product patent from each Brazil and Eurasia corresponding to new chemical entities for the treatment of disorders associated with Neurodegenerative diseases.

If the non-coffee businesses are hived off or sold, Coffee Day valuations may get the caffeine boost investors were desperately waiting for. https://t.co/o2ULM8QVjA

Shares of metal companies rose today, with the Nifty Metal Index rising nearly 0.8% led by Hindustan Copper, Vedanta and Hindalco. London copper prices rose as the market recovered from its lowest in three months on the back of a broad-based rally in financial and commodity markets, Reuters reported. Three-month LME copper climbed 1.3% to $6,033 a tonne.Moreover, Union minister Suresh Prabhu said the commerce ministry is in favour of hiking import duty on aluminium with a view to support domestic manufacturers. “That is a proposal to protect our domestic industry. The proposal is under examination and we support the proposal,” Prabhu told PTI on Wednesday.“Despite the recent weakness, LME Al has been the best performer amongst base metals. We see good support from sustained cost pressure and low inventories. While there are risks on growth and trade tensions, we perceive a possibility of Al reversing its course,” said Edelweiss Securities in a research note. The brokerage said it prefers Hindalco among non-ferrous players “in view of expected volatility in LME Al and alumina prices.”

Shares of Hindustan Unilever rose as much as 1.15% to Rs 1,811.90 per share. HUL on Wednesday said it is considering “legal options” after GST anti-profiteering authority found it guilty of not passing on rate cut benefits to consumers. The National Anti Profiteering Authority (NAA) has passed an order against the company on December 24, 2018 for depositing an amount of ₹223 crore, HUL said in a regulatory filing. Read more

Sun Pharma shares rose as much as 2.41% to Rs 424 per share. The company on Wednesday said its arm DUSA Pharmaceuticals has received relief from a US court in a patent infringement case. The Massachusetts-based Sun Pharma unit has been granted preliminary injunctive relief by a federal district court prohibiting defendants Biofrontera Inc, Biofrontera Bioscience GmbH, Biofrontera Pharma GmbH, and Biofrontera AGf from using its confidential and proprietary trade secret information, said the company. Read more

Markets to remain up on future expiry, Choice Broking

Mutual funds suffered redemptions of $56.2 billion in the week ended 19 December. That’s the biggest outflow since the week ended 15 October 2008, according to data released on Wednesday by the Investment Company Institute. Read more 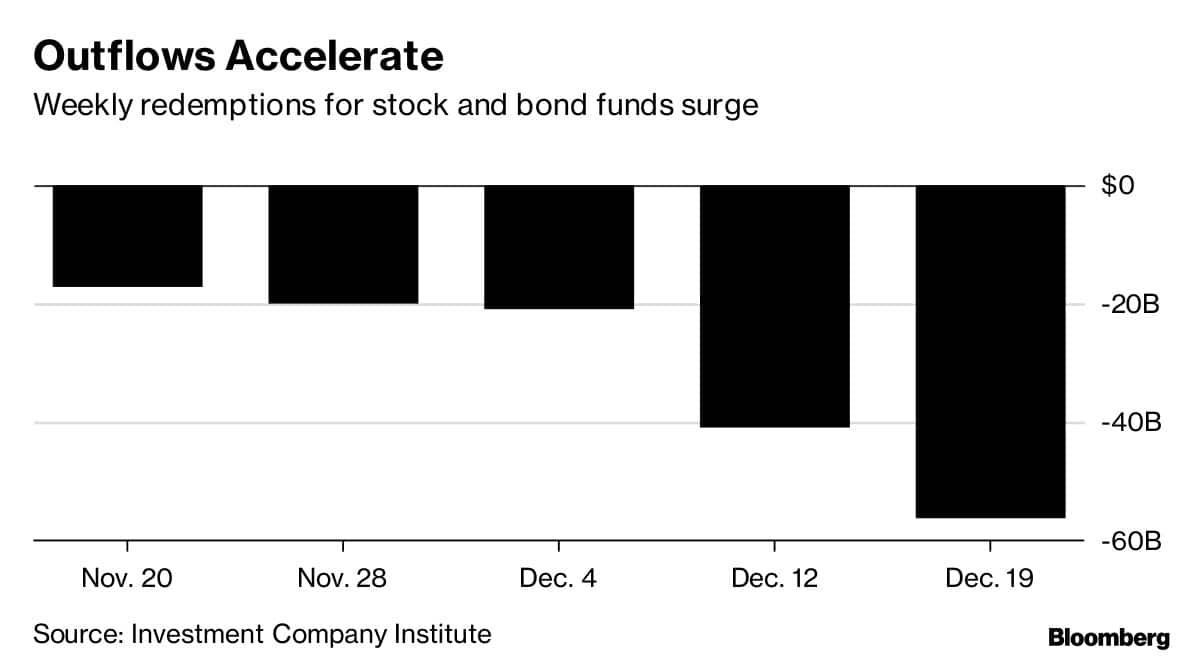 Oil prices fell after soaring 8 percent in the previous session, as worries over a glut in crude supply and concerns over a faltering global economy pressured prices even as a stock market surge offered support. Brent crude oil futures were down 8 cents, or 0.15%, at $54.39 a barrel. They rose 8% to $54.47 a barrel the day before. US WTI crude futures fell 0.19% to $46.13 per barrel. They jumped 8.7% to $46.22 per barrel in the previous session.Gold prices inched higher amid concerns about global economic growth and a partial U.S. government shutdown, although a rebound in investor risk-appetite in the previous session limited gains. Spot gold rose 0.4% to $1,271.85 per ounce. In the previous session, the metal hit $1,279.06 an ounce, its highest since June 19. US gold futures inched up 0.1 percent to $1,273.9 per ounce.Metals: London copper prices bounced back, recovering from their lowest in more than three months on the back of a broad-based rally in financial and commodity markets, but gains were limited by global economic growth concerns. Three-month LME copper had climbed 1.4% to $6,040 a tonne, with the most-traded copper contract in Shanghai gaining 1% to $7,035.96 a tonne. Reuters

Asian stocks climbed on Thursday after the biggest rally in U.S. equities since 2009 offered relief from this month’s wrenching global market downturn. Japanese benchmarks jumped well over 3% and Australian shares advanced more than 1% as trading resumed after holidays there. However, Korean stocks were flat, Hong Kong saw more modest gains and U.S. futures dipped, suggesting the follow-through from the blow-out session on Wall Street has limits.The MSCI Asia Pacific Index rose 1.6% as of 10:53 a.m. in Tokyo. Japan’s Topix gained 3.9% and the Nikkei 225 rose 3.3%. Futures on the S&P 500 Index dipped 0.5%. The underlying gauge rose 5% at the close in New York, after falling within two points of a bear market earlier in the session. The Nasdaq 100 surged 6.2% and the Dow Jones Industrial Average rallied 1,086 points. Australia’s S&P/ASX 200 rose 1.3%. Kospi rose 0.2%. Hong Kong’s Hang Seng advanced 0.4%. The Shanghai Composite rose 0.6%. Bloomberg