One might have expected a windfall jump in profitability for auto firms in the December quarter because of the prolonged fall in raw material prices. But it was not to be. With other costs kicking in, most firms just maintained operating margins on a quarter-on-quarter basis. In fact, they came in lower than consensus forecasts by analysts, disappointing the Street.

That said, some costs were one-offs such as provisions that were made under the new Bonus Act or a change in valuation of assets. Surprisingly, the darling among auto stocks, Maruti Suzuki India Ltd, disappointed the most as its operating margin was way below what the Street expected. Of course, it shed inventory, which led to a rise in raw material costs as a percentage of sales. Importantly and slightly discomfortingly, most auto makers spent more on advertising and marketing to combat competition. This is unlikely to end soon as demand is weak and new entrants are consistently trying to vie for market share. 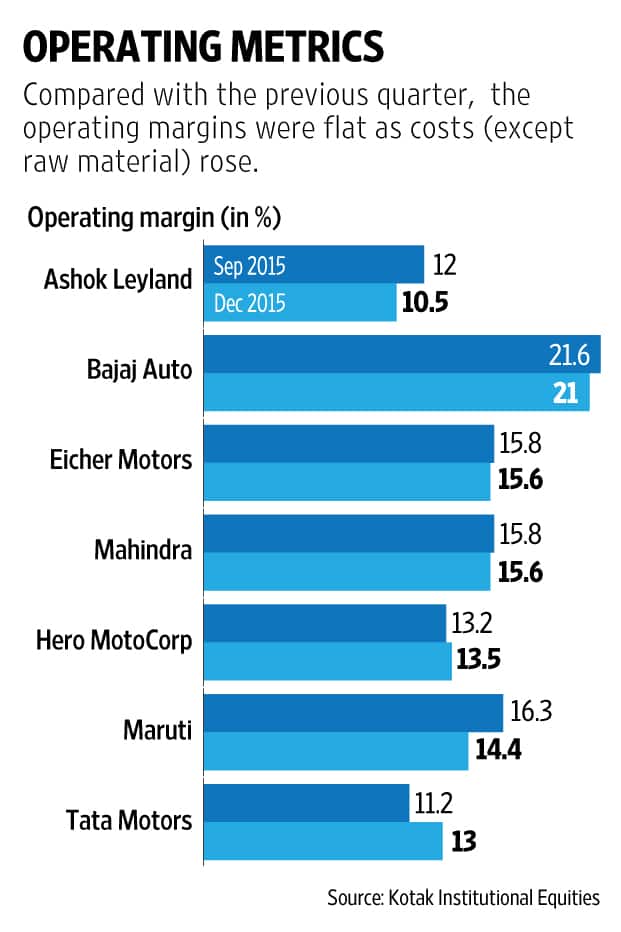 If this was on home ground, the overseas markets have been equally tough. Firms such as Bajaj Auto Ltd, with exports to Egypt, Nigeria and Argentina, were hit as the collapsing crude oil prices pummeled currencies, making it tough for them to access US dollars for imports.

For Tata Motors Ltd, its UK-subsidiary Jaguar Land Rover Plc is battling a slowdown in China, where it sells almost one-fourth of the passenger vehicles it makes.

The slowdown in the overseas markets and the discounts in the local markets adversely affected average revenue per vehicle. The sales pattern, however, was mixed, with trucks and buses clocking the best performance. The worst were two-wheelers, within which motorcycle sales were sluggish as rural demand stayed low.

Given the challenges mentioned above, it is commendable that auto firms held on to operating margins, although they seem to have peaked at current levels.

No wonder then that investors did not give a thumbs-up to auto stocks. A good monsoon is critical to boost demand. Fitch Ratings says in a new report that the low fuel prices and falling interest rates (down by 125 basis points in 2015) may support the growth of Indian auto makers. Two-wheelers may be the last of the lot to recover.