Coffee exports fall but revenues rise due to strong dollar

Coffee exports fall but revenues rise due to strong dollar

Kochi: High prices and a strong dollar helped coffee exporters register higher revenues for the year ended 31 March though volumes fell by as much as 6.77% to 2,04,171 tonnes compared with 2,18,997 tonnes a year ago. 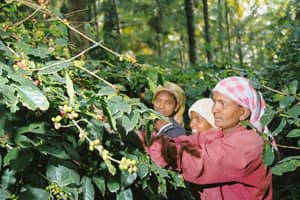 The rupee has fallen by around 25% between April 2008 and March this year.

There was a drop of almost 7,500 tonnes in the export of instant coffee to Russia alone due to the global economic downturn. Coffee exports to the US and Finland also dropped substantially, Rau said. He said the coffee production in the country, in the current season, will likely be lower and that an official assessment will be made shortly.

Rau said unfavourable weather conditions such as unseasonal rains and severe drought in parts of coffee-growing areas could push the output down. A fall in production across the globe could see prices rise again, he added.

The board’s production estimate for the current coffee year is 2,76,000 tonnes, Rau said, but this will likely be revised downwards to 2,60,000 tonnes, largely on account of bad weather conditions.