Between January 2011 and now, the Insurance Regulatory and Development Authority (Irda) has imposed a fine of ₹ 4.99 crore on both life and non-life insurance companies. Of this, more than half the penalty amount— ₹ 2.71 crore—has come from companies that have overpaid their intermediaries such as corporate agencies and referral companies.

So why are insurers overpaying their corporate agents, which has led Irda to levy maximum penalty amounts?

In June this year, Irda slapped a fine of ₹ 1.47 crore, the highest so far, on HDFC Standard Life for two offences. First, for not following the regulator’s directive to remove the exclusion clause of 90 days in its home loan term product, and second, for overpaying its corporate agents. The second highest has been ICICI Prudential, that was also pulled up for overpaying its intermediaries. Of a total fine of ₹ 1.18 crore, the insurer had to cough up the maximum for this breach: ₹ 1.07 crore.

But that’s not the only common thread that runs along these four companies; all of them have banks in their corporate group structure. Banks that are also corporate agents are typically known as the bancassurance channel of the insurance company. 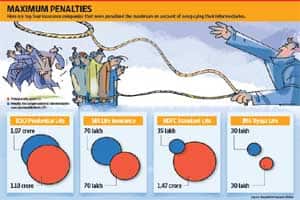 Illustration by Shyamal Banerjee and Graphics by Sandeep Bhatnagar/Mint

It further states that the insurer can share expenses on co-branded sales literature but such expenses should be reasonable and in no way linked to the acquisition of customers. So according to the guidelines, an insurer can pay up to 40% of the premium collected as commission to the corporate agent and not a penny more. For insurers that are more than 10 years old, this limit is 35%.

These companies have paid expenses that are over and above the commissions paid, dressed under different cost heads. So in July 2011, SBI Life Insurance had to pay a fine of ₹ 70 lakh for reimbursing administrative expenses to its corporate agents and also to its master policyholders—master policyholder is an entity in whose name a group insurance policy is issued. But the heaviest penalty landed on ICICI Prudential in May this year for overpaying its corporate agents and referral companies in FY10 and FY11. Again the company paid its corporate agents expenses dressed in costs heads such as marketing, use of infrastructure and banking services. HDFC Standard Life had to pay ₹ 35 lakh for paying marketing expenses to its corporate agents—HDFC Ltd, HDFC Bank Ltd, HDFC Securities Ltd and HDB Financial Services Ltd. The company also used unlicensed individuals to procure business and had to pay ₹ 5 lakh for that.

The latest insurer who got caught in the regulator’s net is ING Vysya Life. The company had to pay a fine of ₹ 30 lakh, but the bulk of the fine came from overpaying its referral entities. The remaining was for reimbursing ING Vysya Bank Ltd for marketing support costs for advertisements, which according to the regulator was beyond permissible limits.

Even as insurers are being caught for a straight violation of the guidelines only now, the trend is not new. “Until 2005, when the corporate agents guidelines were announced, insurers were paying commissions as well as other administrative and marketing costs to their corporate agents, mainly their bancassurance partners. The idea of restricting payments to commissions was two-fold: one to ensure the payments conform to the law and two to ensure that insurers don’t end up paying huge sums to their corporate agents to solicit clients. Many payments had a strong correlation between the payments made and business procured," says Kapil Mehta, managing director and principal officer, SecureNow Insurance Broker Pvt. Ltd.

But even after the regulator prohibited other payments, the practice continued almost unabated. For insurers the logic is simple: if they are using the services of a corporate agent they will need to be compensated. “The laws were made at a time when tied agency did bulk of the insurance business. But that’s changing now. One must understand that the service of corporate agents goes beyond that of agency force. Corporate agents are also involved in marketing, we share their infrastructure and also use other services. For all these services, we need to compensate our corporate agents but the current set of guidelines don’t have any provision for this payment. I think owing to this a lot of other insurance companies will also get charged for the same offence," says Kshitij Jain, managing director and CEO, ING Vysya Life. Jain is not alone. In an interview to Mint Money Amitabh Chaudhry, managing director and CEO, HDFC Standard Life, expressed similar views. He says, “The latest draft of the bancassurance guidelines actually suggests an amount not exceeding 2.5% of premium may be paid for infrastructure, costs of training and incentives to specified persons which we think is a realistic assessment of the efforts needed to manage skill building and training of bank staff."

But insurers have paid huge amounts under various cost heads. For instance, ICICI Prudential in FY10 paid its corporate agent, India Infoline Insurance Services Ltd, ₹ 49.33 crore compared with the permissible limit of ₹ 2.97 crore. In FY11, it paid the same corporate agent ₹ 36.27 crore as opposed to a permissible limit of ₹ 31 lakh. HDFC Standard Life paid HDFC Bank marketing expenses to the tune of 25% of the first year premium in FY11 whereas ING Vysya Life paid around 11% of the total business in the same year.

“Reimbursements should be in reasonable measure. You can’t be paying ₹ 100 as commissions and more than that as marketing expenses because then your main line of activity with the corporate agent becomes marketing and not sourcing customers," says Mehta.

But in case of referral agencies, insurers cite lack of clarity in the guidelines. “We interpreted the rules differently. Our interpretation was that the referral agencies can be paid a percentage of the overall business procured whereas the regulator’s interpretation was a percentage of the business procured by the referral agency," says Jain. Jain is referring to the guidelines that were announced in 2003 that allowed a referral fee up to 55% of the total premium procured— whereas the law states that commissions are capped at 40% of the premium. However, in FY11 the regulator altered the guidelines and limited the payment made to referral companies to 25% of the commissions payable on the policy or not more than 10% of the total income of a referral entity.

With Irda’s scrutiny going beyond products to insurers, more companies may come under the regulatory net.

(This is the first part of the two-part series. The next story will deal with how the regulator finally has the capacity to inspect comprehensively and why the defaulting companies should get ready to pay heavy penalties.)