Mumbai: The benchmark 10-year government bond yield rose the most in more than 11 months on Thursday after the government said it would borrow an additional Rs50,000 crore via bonds to fund its fiscal deficit. 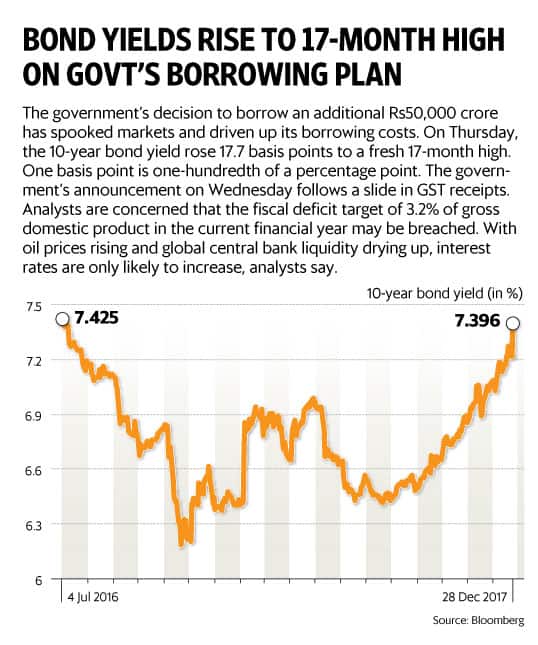 Bond prices and yields move in opposite direction. Rising yields will raise the government’s borrowing costs.

The government announced the additional borrowing plan on Wednesday after the goods and services tax (GST) data for December showed a slide in revenue receipts. The expanded market borrowing programme, analysts say, signals that the government may breach its fiscal deficit target of 3.2% of gross domestic product (GDP).

This may force finance minister Arun Jaitley to recalibrate his fiscal consolidation roadmap of achieving capping the fiscal deficit at 3% of GDP by 2018-19. GST collection in December, on transactions done in November, fell further to Rs80,808 crore from Rs83,346 crore in November, according to official data released on Tuesday.

The government has taken approval from Parliament for extra spending of Rs33,380 crore.

“Rise in market borrowings is coming at a time when appetite from investors has lessened and other factors have turned wobbly, especially global yields. Now investors will be more concerned about next year’s supply," said Soumyajit Niyogi, associate director, India Ratings and Research Pvt. Ltd.

“Going ahead, we continue to believe that India rates look set to remain on the upside in FY2019. The floor will be set with the end of RBI’s rate-cut cycle and expectations of a possible start to a rate-hike cycle. Other factors like tightening domestic liquidity, concerns on quality of fiscal consolidation, and gradual global policy normalization, etc. will ensure that the yield may directionally remain on the upside in FY2019," the Kotak report said.

Traders are already concerned by a surge in international crude oil prices, which may lead to higher inflation and may give less space to the Reserve Bank of India to cut rates.

After the ruling Bharatiya Janata Party won elections with a reduced majority in Prime Minister Narendra Modi’s home state of Gujarat, analysts expect the government to resort to populist measures in the next budget to woo voters ahead of a string of state polls leading up to the 2019 general election.

So far this year, the rupee has gained 6%, while foreign institutional investors have bought $7.73 billion and $22.99 billion in equity and debt, respectively.