MCX debuts with listing gain of 26%

MCX debuts with listing gain of 26%

Mumbai: India’s largest commodity bourse, the Multi Commodity Exchange of India Ltd(MCX), had an impressive listing gain on Friday of 26% over its issue price of ₹ 1,032, even as the benchmark 30-stock Sensex rose 2% to 17,503 points on firm global cues.

MCX’s initial public offer (IPO) was the first in 2012 and was subscribed over 54 times. Reasonable pricing led to high demand for the shares and the listing gains, analysts said.

MCX, the first Indian exchange to get listed, has a near-monopoly among commodity exchanges, with an 87% market share.

Promoter Financial Technologies (India) Ltdand six other investors sold an aggregate stake of 12.6% or 6.4 million shares in the IPO that closed on 24 February.

The public share sale attracted bids worth around 35,000 crore for an issue size of ₹ 663 crore. Traders work on the trading floor of the Multi Commodity Exchange of India in Mumbai. Photo: Bloomberg

In Friday’s pre-open bidding, MCX shares attracted a premium of over 40% to touch a high of ₹ 1,450 apiece before settling down at ₹ 1,387 at the close of the auction. The stock declined after the initial pop to close at ₹ 1,297.

Although MCX listed only on BSE, rival National Stock Exchange of India Ltd(NSE) permitted MCX shares to be traded on its bourse. NSE saw higher trading in MCX shares compared with BSE, attracting 57% of the total trading volume of nearly 14 million shares.

MCX’s IPO success is a positive signal for primary markets that have been lacklustre for over a year although its wider impact could be muted, analysts said.; This year has already seen 11 IPOs called off and the lukewarm response to Oil and Natural Gas Corp. Ltd’s auction of shares last week could be a dampener, wrote Jagannadham Thunuguntla, head of research at SMC Global Securities Ltd, in a note on Friday. 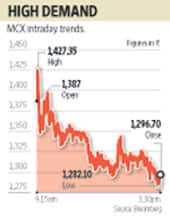 The probable amount that the 11 firms were planning to raise was an aggregate 4,771 crore, Thunuguntla said. But a stock-market slump last year, with the Sensex dropping 25% in 2011 and IPOs yielding poor returns, has kept investors from public share sales. The total amount raised through IPOs in India fell 85% to ₹ 6,129 crore in 2011, compared with the previous year. Roughly three-fourths of IPOs in 2011 and nearly 80% of IPOs in 2010 are trading below their offer price.

So far this year, the Sensex has gained about 13%.

“The MCX listing was on expected lines; the market was expecting around 30% returns and that is where we have ended on the listing day," said Vikas Khemani, head of wholesale capital markets at Edelweiss Securities Ltd. Edelweiss, Citi Global Markets India Pvt. Ltd and Morgan Stanley India Co. Pvt. Ltd were the lead merchant bankers managing the MCX share sale.

At an issue price of ₹ 1,032, MCX was valued at 18 times estimated earnings (annualized from nine-month numbers) for fiscal 2012, in line with the valuations of global exchanges, based on calendar year 2011 earnings.