Procter and Gamble: in restructuring mode

Procter and Gamble Co.’s (P&G’s) management told investors, after their March quarter earnings, that they have decided to exit or fix unprofitable product lines in India. The portfolio they are focused on is growing in the high single digits although overall growth is affected by the restructuring. A large part of P&G’s India business is privately held but two firms—Procter and Gamble Hygiene and Health Care Ltd that sells Whisper sanitary napkins and Vicks cold and cough products, and Gillette India Ltd that sells shaving, oral care products and batteries—are listed. A large share of restructuring appears to be underway in the unlisted part—hosting detergents, shampoos and other personal care products.

Their March quarter performances give some idea on where the companies stand in this restructuring process. Gillette India’s Duracell battery business has been sold with effect from 19 February, as part of a global exit from batteries. This business contributed to 7% of revenue in the March quarter and to 15% of profit before tax. It will not reflect in Gillette’s financials from the June quarter onwards.

What remains is the shaving products and oral care business. Shaving products’ sales rose by a smart 15% from a year ago and its profit, too, jumped by 33.4%. This business contributed to nearly three-fourth of revenue. In oral care, a “portfolio optimization" exercise led to a 9% decline in sales over a year ago, and segment profit came in at ₹ 14.1 crore, better compared with the year-ago quarter’s ₹ 17.6 crore loss, but lower than the December quarter’s ₹ 19.8 crore profit.

Gillette has benefited from lower commodity prices, as seen by a 2.4% decline in material costs, although overall sales rose 12% to ₹ 553 crore. A year ago, its advertising and promotion expenses had risen sharply due to its efforts to grow its oral care business. Since that has abated and input costs are lower, its operating profit has risen from ₹ 34.8 crore a year ago to ₹ 123.9 crore. What’s more, even sequentially, its operating profit margin has improved, by about 4.5 percentage points.

P&G Hygiene’s sanitary napkins and cold and cough products are fairly well-established and profitable. No major restructuring is likely here, and its press statement does not mention anything either. Unlike Gillette, this P&G subsidiary does not break up reporting for the two product segments.

Overall, its sales rose by 10.5% to ₹ 613.8 crore over a year ago; but here again, lower input costs meant that its material costs rose by only 3%. However, P&G Hygiene’s advertising and sales promotion (A&SP) costs and other expenses have risen significantly, up by 40% and 27.3%, respectively. Its royalty costs, too, have risen ahead of sales growth, up by 17.4%.

There could be an element of timing here—advertising campaign costs may be incurred in a quarter although the campaign itself may run for a longer period. In fact, A&SP costs are flat in the nine-month period. However, this increase in costs has led to a relatively muted 8.5% increase in its operating profit. 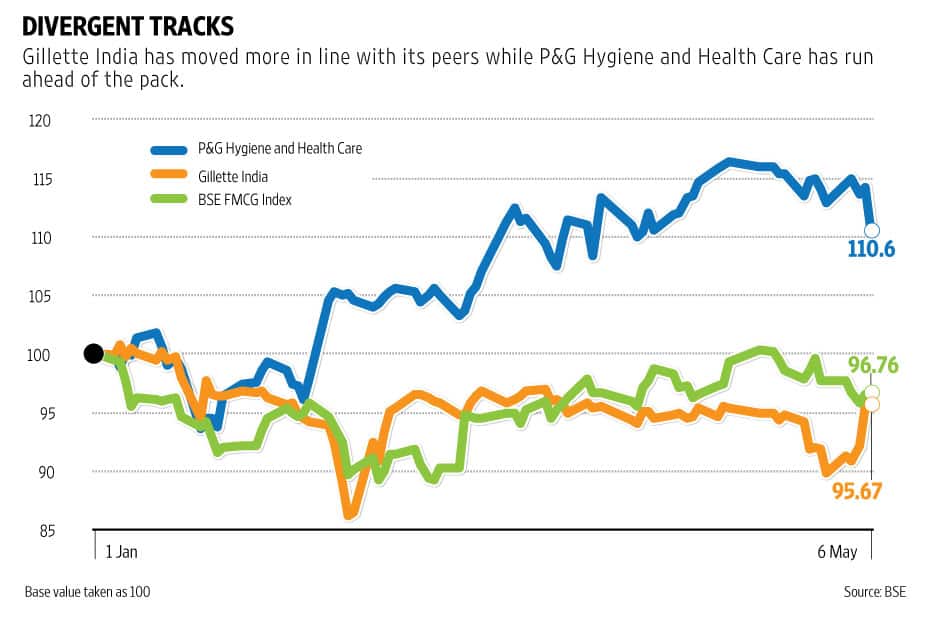 The market’s reaction to P&G Hygiene’s results showed its disappointment as its share declined by 3.2%. However, the improvement in gross margins means its business is in good shape and if advertising costs come down to more normal levels in the subsequent quarters, its performance should improve. In Gillette’s case, its shares are up by 4.2% after its results. Investors will be looking to its oral care business to see when growth recovers.