Allocation to India by Asia ex-Japan funds has increased to 14% in December from 13.6% in November, pointed out Kotak Institutional Equities’ latest foreign fund-flow tracker.

Further, fund allocation to India by global emerging market funds (GEM) remained around 11% in December. However, allocation by Asia ex-Japan exchange-traded funds (ETF) to India improved to 8.9% from 8.6% a month ago. 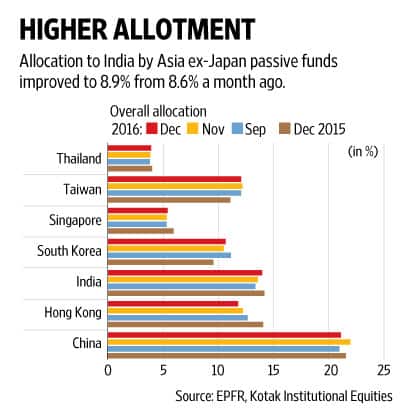 Execution of dedicated freight corridors (DFCs) is gathering pace. According to Crisil Research, the eastern and western corridors have seen a significant step-up in investments.

“The speed of work can be gauged from the fact that about 29-31% worth of (planned) contracts were awarded in fiscal 2016, compared with around 23-24% in the previous seven years cumulatively," says a Crisil Research report.

The ratings firm expects the remaining civil and systems contracts to be awarded in the next few months. Apart from providing business for engineering procurement and construction firms, execution and commissioning of DFCs will ease congestion on the rail network. Average realization from basmati rice exports declined by 32.3% from Rs77,982 per tonne in FY14 to Rs52,789 in FY17 (up to October), according to data collated by HDFC Securities Ltd. Subdued domestic demand in comparison to supply, along with fall in exports, led to lower realization. This could lower the acreage under cultivation as farmers have incurred losses in the last two years.

Note that the industry suffers from high holding cost of inventory as the production is seasonal. Lower production and likelihood of higher exports may support prices, which could see better times by FY2018. According to HDFC Securities Ltd, the ban on Indian basmati rice, which was imposed by Iran on grounds of a healthy local crop and huge inventory pile up, has been lifted now.

West Asia accounts for nearly three-fourths of the basmati rice exports from India, and the lifting of the ban is expected to help. China is also likely to import some of its requirement from India.