There were some green shoots at the beginning of 2018 for the real estate industry, but they wilted away later in the year as the NBFC crisis led to drying up of the only funding source for the sector

The real estate sector has been down and out for about five years, with the last two years being particularly bad on the back of demonetisation and implementation of Real estate (regulation and development) Act (RERA) 2016 and goods and services tax (GST). So, at the beginning of 2018, the sector clutched on hope, though tentatively, that the worst was behind and things would only improve from thereon.

Most stakeholders were of the view that things would finally settle down in 2018 and the sector will beat the lull. In fact, in the first three quarters of the calendar, supply side stakeholders successfully built the narrative that the worst is over and the sector has started moving north, especially the housing segment.

But all green shoots vanished when the non-banking financial crisis (NBFC) crisis struck in October. The crisis has only increased the problem for developers and sector. While prices are expected to remain stagnant, project execution and deliveries may get impacted in 2019. 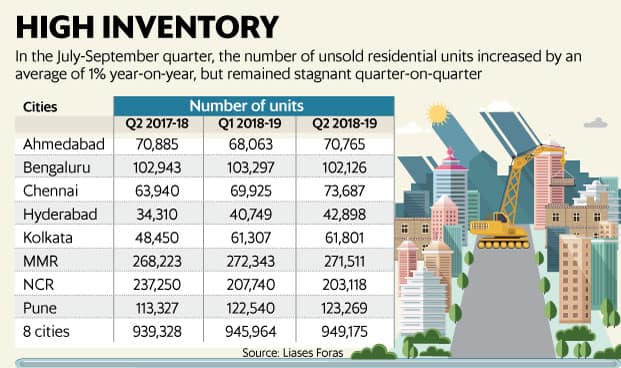 In the last couple of years, given piling inventory and lack of buyers, developers realised that they first need to execute and complete existing projects rather than launching new ones, and that their projects need to be in line with homebuyers’ demand.

So, in 2018, many developers decided to foray into the affordable housing segment and got positive response from homebuyers. “The year 2018 has been an important one for the affordable housing segment and the momentum is here to stay. This is reiterated by the fact that majority of the launches as well as demand across markets are being reported in this segment only," said Anshuman Magazine, chairman, India and South East Asia, CBRE, a real estate consultancy.

Not only demand from home buyers, even incentives offered by the government under Pradhan Mantri Awas Yojana (PMAY) pushed developers towards the affordable segment. “Policy initiatives (both on the supply and demand side) undertaken by the government in the past two years have contributed to increased homebuyer interest in this segment. Affordable housing, aided by subsidy on PMAY, has been a key phrase this year, giving customers many benefits," said Magazine.

While some project launches were seen in the affordable housing segment, the number of launches in the mid and luxury housing segment was minuscule. Prices remained muted across the country.

Even as the sector was positive on its prospects in 2018, it did not witness any significant improvement in demand and sales as the year went by. On top of it, another crisis came to hunt the sector. “Lending to the real estate market has now entered a difficult phase. From cautious lending by NBFCs and housing finance companies (HFCs) some years back to the present conundrum, funding to the sector has almost come down to a trickle from the two sources," said Ramesh Nair, chief executive officer and country head, JLL India, a real estate consultancy firm.

Typically, developers raise funds for a realty project through investors, private equity (PE) funds and banks. However, because of poor sales and low returns in residential real estate in the last few years, investors and PE funds have dried out. Besides, owing to several cases of delay and default in repayment of loans, even banks are cautious in lending to realty firms.

“While developers owe a whopping ₹ 2.6 trillion to NBFCs, default by a leading NBFC has made things difficult with banks and mutual funds now a bit paranoid on lending to the real estate sector," added Nair.

“With a majority of NBFCs having increased rates across the board, margins of developers have been impacted and it is affecting their overall operations. The immediate liquidity crisis has also forced some of the NBFCs to slow down lending to ongoing projects as well. If that continues for long, it will affect construction activities," said Magazine.

The current liquidity crisis is here to stay and may impact project execution. There is huge unsold inventory lying with developers in many cities. While some developers may resort to price cuts to overcome the situation, the impact is not expected to be huge.

End users can benefit in the current scenario as there are chances of getting a good bargain, but it’s best to stay away from under-construction projects as of now.