How crucial is the land acquisition bill to revive projects?

The land acquisition bill has already run into opposition from various parties. The Bharatiya Janata Party (BJP) leaders have formed an eight-member committee to hear the concerns of farmers and organizations. It does seem like a long haul before the ordinance becomes a law. If the bill does not see the light of day in the budget session of Parliament, will it really hamper the investment revival?

Around a third of the top 100 stalled projects which make up around 93% of all stalled projects in the CMIE (Centre for Monitoring Indian Economy) records, are stuck due to land acquisition issues, according to an HSBC Global Research study done last month. The ministry of finance estimates that the stock of these stalled projects amounts to ₹ 18 trillion and that more than half of these are from the infrastructure sector.

“The NDA (National Democratic Alliance) government will have to find a middle ground in drafting the law which should help figure out the right value of land from the land owners’ perspective and give companies certainty about their project execution and expenses," said Akhilesh Tilotia, associate director at Kotak Institutional Equities. 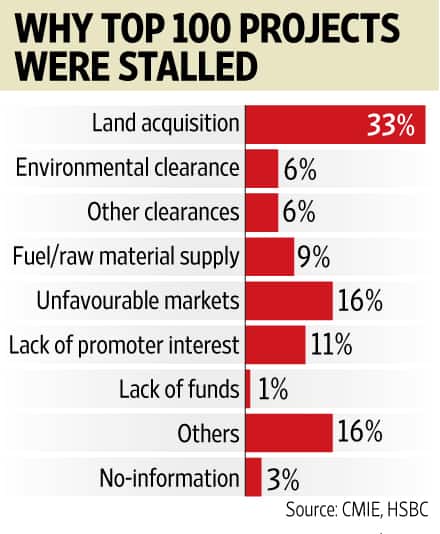 Land is not the only reason which is stalling projects. Other issues hampering project revival are environmental clearances, supply issues in fuel and raw material, cost over-runs and overall macro conditions. Around 75,000 megawatts of capacity in the power sector is stuck due to lack of fuel, gas and coal linkages. “The coal auctions will resolve fuel supply issues and with the macro turning around, about half of the stuck projects linked to lack of funds and promoter interest could also see some resolution. Inflation is softening which will give room for easing the policy rates," said Pranjul Bhandari, chief India economist at HSBC Securities and Capital Markets (India) Pvt. Ltd.

The central government has limited resources for capex, especially after taking the 14th Finance Commission’s recommendations for tax sharing with states and the need to prune the fiscal deficit. That’s all the more reason to untangle stalled projects swiftly, which will bring down the capital output ratio, resulting in higher growth from less capital. Also, as an HSBC report points out, “A vector autoregression (VAR) analysis between stalled investments and new investment shows that as stalled investments fall, freeing up resources, new projects start to pick up, showing the maximum increase in the second quarter and continuing to rise for the next three years (although at a decreasing rate). The cumulative multiplier can be as high as 1.8 over one year." Making the land ordinance law is, therefore, imperative for a revival in investment demand.