Why business expectations are so tepid despite recovery in Indian economy

RBI's industrial outlook survey, which polls manufacturing companies, showed that its Business Expectations index for the second quarter of FY19 declined from the previous quarter

The Nikkei India Composite PMI Output index, a gauge of private sector economic activity in both the manufacturing and services sectors, came in at a strong 54.2 for July, up from 52.6 in June. A reading above 50 denotes expansion, while one below 50 indicates contraction from the previous month. As Chart 1 shows, the composite PMI (Purchasing Managers’ Index) is at its highest level since October 2016, which was the month before demonetisation. 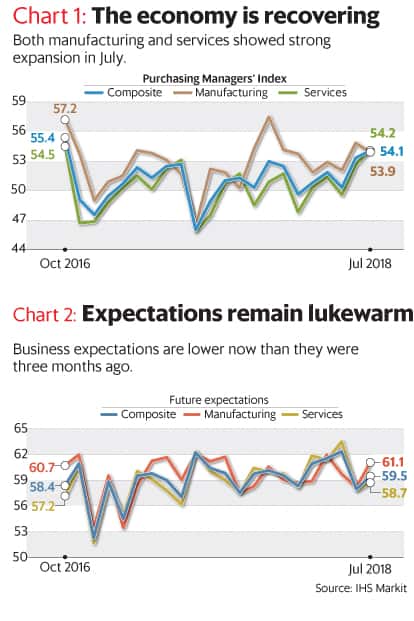 That means momentum has been restored in the Indian economy, after the twin shocks of demonetisation and the introduction of the goods and services tax (GST). This is also borne out by other indicators, such as auto sales, rising bank credit, increasing rural demand and, in spite of its many flaws, the Index of Industrial Production (IIP).

Unfortunately, a rather contrary tale is being told by the sentiment indicators. As Chart 2 shows, the Future Expectations sub-index of the PMI is now lower than what it was in March, April and May, and indeed in many months last year as well. Recall also the forebodings about the future shown in the Reserve Bank of India’s (RBI’s) Consumer Confidence Survey. And that’s not all—RBI’s industrial outlook survey, which polls manufacturing companies, showed that its Business Expectations index for the second quarter of FY19 declined from the previous quarter.

The question is: why, in spite of the recovery in the economy, is sentiment so low? Why is it that, although the India PMI surveys show rising employment levels, those surveyed in the RBI Consumer Confidence Survey feel there will be little improvement in their job prospects and in their incomes in the next one year?

There could be several reasons. Perhaps businesses are wary about the global environment, with its trade wars and rising geopolitical tensions. They may even be concerned about political risks as we come closer to the general election next year. Perhaps, as IndusInd Bank Ltd chief economist Gaurav Kapur says, businesses may be worried about margins, as the PMI surveys consistently show rising input costs and so far tepid output charges. It may well be, as Union minister Nitin Gadkari reportedly said, that there are no jobs. Reports say there are a huge number of unfilled vacancies in government posts and that may be a reason for despondency. And, of course, there is no data on whether the informal sector has recovered.

On the other hand, it may simply be that perceptions take time to change. After all, as Chart 1 shows, it was just a couple of months ago that the services sector contracted and the recovery in manufacturing too has been patchy. Past experience colours future expectations, which are slow to change. Businessmen and consumers have been exposed to shocks in the past two years, and it will take a while for full confidence to return.

But the government cannot let the recovery take its own sweet time, not with the elections less than a year away. Already, it has set in motion several interventions in the Indian economy, through higher minimum support prices for farmers, higher import duties to protect Indian industries and lower indirect taxes. But if it wants voters to feel good before the elections, it must ensure that businesses are not subjected to tax harassment, that exporters get their refunds in time and that farm support prices are backed by adequate procurement. It must ensure an increase in construction jobs, so that the masses get employment. Most importantly, it must ensure that the economic recovery continues smoothly.