Regardless of whether Reliance Jio is struggling to generate revenue or if this is part of a deliberate strategy to squeeze competitors, the fact remains that incumbents are in for more trouble

By providing free services, how much has Reliance Jio Infocomm Ltd been sacrificing in terms of revenue? Until last Friday it was anybody’s guess. Now, with the company announcing that 72 million of its users have signed on as paid subscribers, it’s easier to arrive at an estimate.

Assuming Jio’s average revenue per user (Arpu) settles at Rs225, somewhere between its Rs149 and Rs303 plan, it turns out that Jio could have generated revenue of around Rs4,860 crore, or $750 million in the April-June period. Reliance Industries Ltd (RIL) has decided to forego this revenue and has announced a “Summer Surprise" instead, where services during this period will be offered free of charge. The latest move may well be because of a concern that a sudden shift from free to paid services will hit customer retention. If so, Jio’s monetization plans would be far more staggered than what its investors had estimated.

But none of this seems to be bothering investors. Instead they’re cheering the higher-than-expected number of paid subscribers, ignoring concerns about the continued delay in the company’s ability/willingness to charge for its services. RIL’s market capitalization rose by around $2.5 billion on Monday.

The company has invested over $30 billion in its telecom venture. Another $1 billion or so is perhaps being viewed as chump change in the overall scheme of things.

It’s not clear if Jio’s latest moves will help it garner a much higher share of subscribers—its penetration vis-à-vis the total number of compatible 4G handsets is already high at around 55%—but the markets clearly fear the worst. Idea Cellular Ltd’s shares are trading at Rs85 apiece, around 23% lower than the price at which the Aditya Birla Group said it will buy shares from Vodafone Group Plc.

And now with investors cheering Jio’s “Summer Surprise", who knows what surprises lie ahead. Analysts at Kotak Institutional Equities said in a note to clients: “On a lighter note, there is perhaps a ‘Monsoon Hungama’ left still that completes the circle from RIL Telecom 1.0 to 2.0." The reference is to the group’s CDMA launch in 2003 with a scheme by that name.

Analysts at Goldman Sachs said in a note to clients, “Given a number of extensions of free offer period by Jio, we do not rule out the possibility of future price cuts or more discounts by it to retain customers; the company mentioned Friday’s announcement as the first of many ‘surprises’ to be rolled out for Prime customers." 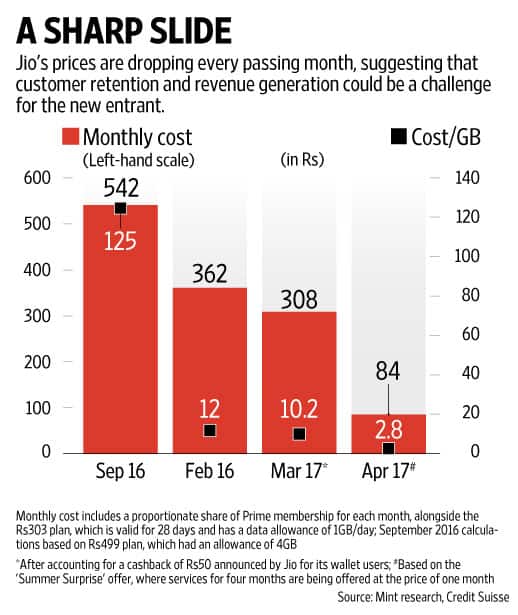 The chart alongside shows how effective monthly tariffs have been falling at Jio since it announced its tariff plans.

But all told, regardless of whether Jio is struggling to generate revenue or if this is part of a deliberate strategy to squeeze competitors, the fact remains that incumbents are in for more trouble. Their Arpus can be expected to fall further, as they cut prices to retain customers and try and blunt the edge of Jio’s latest offers. Their stocks adequately reflect these concerns.

But for the rally in RIL’s shares to be justified, the company needs to demonstrate that it can soon start billing its customers based on its stated tariffs.