Three years of Modi government: Here’s how the markets have performed

In the 3 years of the Narendra Modi government, stock markets have been largely on an upward march, with Sensex and Nifty currently hovering at record highs

In the three years since the Prime Minister Narendra Modi-led National Democratic Alliance (NDA) government came to power at the centre, Indian stock markets have been largely on an upward march, with benchmark indices Sensex and Nifty currently hovering around record highs. The government’s policy initiatives and the BJP’s win in the Uttar Pradesh elections have reinforced investors’ faith in the reforms process and triggered hopes for long-term political stability in the country.

How contribution of sectors to BSE’s market capitalization has changed Most preferred Sensex stocks, then and now

Three years after the NDA government took charge, ITC Ltd, Power Grid Corp. of India Ltd, Sun Pharmaceutical Industries Ltd and ICICI Bank Ltd have retained their position in the list of 10 most preferred Sensex stocks by analysts. Banks seem to be in favour currently, with State Bank of India and HDFC Bank Ltd also in the list of preferred stocks, as analysts bet on an improvement in economic growth. There was no clear trend in preferences three years ago. 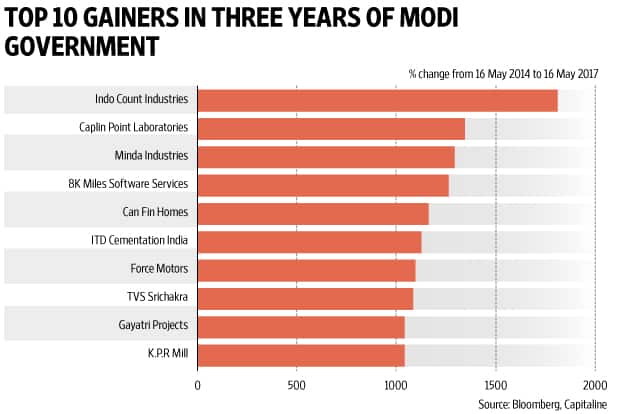