Sebi prepares the market for Budget 2017

Mumbai: The Securities and Exchange Board of India (Sebi) is likely to impose stricter margin trading rules on budget day to combat potential volatility, said two people aware of the matter, including an official with the regulator. The Union budget is scheduled to be presented on 1 February.

Stock markets can become volatile on budget day. While the past seven years saw the Sensex’s budget day close change less than 2% of the previous day’s, there have been instances when the markets have seen wild moves—for instance, Pranab Mukherjee’s 2009-10 budget when the Sensex closed 5.83% lower or Yashwant Sinha’s 2000-01 budget when it fell 5.12%.

ALSO READ | Cloud over budget date as EC yet to decide

Additionally, to mitigate potential liquidity risks arising out of any possible large-scale redemption in mutual funds on budget day, Sebi and the Reserve Bank of India (RBI) are in discussions to create a special liquidity window, the two people cited above said on condition of anonymity.

“We just need to be prepared for any news that may have an impact on the market on the budget day or any such important day. The key issue is about risk management because if the market falls, defaults may occur," said the first person.

Regulators have an early warning group that prescribes pre-emptive measures for events likely to disrupt markets. 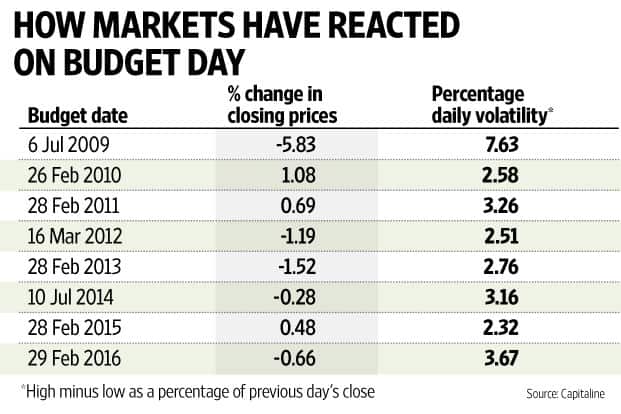 Sebi is proposing to shift margin trades to square-off mode at 80-85% of their eligible limit rather than 90-95% currently.

Margin orders (where you pay only a percentage of the actual value of the trade) placed during the day are squared off either at the end of the day or once the trading entity reaches a pre-determined eligible limit during the trading hours as a containment measure. Normally, too much tightening in margin trading is avoided because the brokers may have to arrange for a large amount of money and they may be forced to square off trades at a loss.

A Sebi spokesperson did not respond to an email seeking comment.

“As and when the margin call reaches close to 80-85%, brokers will be asked to first pay the outstanding amount and reinstate the margin money before building further positions. Brokers have been told that they may be vulnerable and if they are anticipating to build positions, they have to be ready with the money. Exchanges have been alerted on all the possible risks," said the second person.

According to Sanjay Sinha, founder of Citrus Advisors and a veteran fund manager, Sebi should be careful in imposing stricter norms for margin trades and positioning norms.

“Any significant change in these norms may induce a fear in the market participants that the government is going to make budgetary announcements that may have a negative impact on traders and other market participants. The current norms are fine and with adequate alertness, things can be handled unless something really unprecedented happens to hurt liquidity in equities," said Sinha.

Sebi is also in discussions with RBI on the issue of mutual fund redemptions.

“If any panic situation causes people to sell mutual funds, they may face liquidity issues if they don’t have enough funds to handle redemptions. Liquidity has to be created by RBI in that situation," the first person said.

In 2008, after the fall of Lehman Brothers Holdings Inc. and the subsequent global credit crisis, RBI introduced special liquidity windows for mutual funds to handle redemptions in schemes, especially those which had short-term fixed income securities as the underlying assets.

Sinha said that as a matter of prudence, this can be done again for budget day, but the measures taken by Sebi in the past three years for debt-oriented mutual funds should be strong enough to protect the MF industry from redemption crisis situations.

Sebi has also asked exchanges to raise their vigilance on market activities during budget day and the succeeding trading session as well, especially due to risks arising from increasing high-frequency trading.