Tank full of issues in bringing petrol and diesel under GST

state governments derive a lion's share of revenues from sale of these fuels and bringing them under the GST ambit would mean a sharp decline in revenue, which then will have to be compensated.

Union petroleum minister Dharmendra Pradhan said last week that petroleum products should be included under the goods and services tax (GST). That should help consumers pay a rational price at a time when diesel and petrol prices are touching multi-year highs.

This makes sense. Even if petrol and diesel are taxed at the highest GST slab of 28%, it would be lower than taxes already being paid and result in lower retail prices, helping consumers. Also, those industries which might be using them as inputs could claim input tax credit if these are bought under GST.

Cast your eyes on Chart 1 below. CARE Ratings assumes that instead of an effective tax rate of 100% on petrol and 66% on diesel, GST of 90% and 80% are applied on petrol and 60% and 53% on diesel. That’s a 10 and 20 percentage points reduction in the current effective tax rates for both products. It is also assumed to be equally distributed between the centre and states. 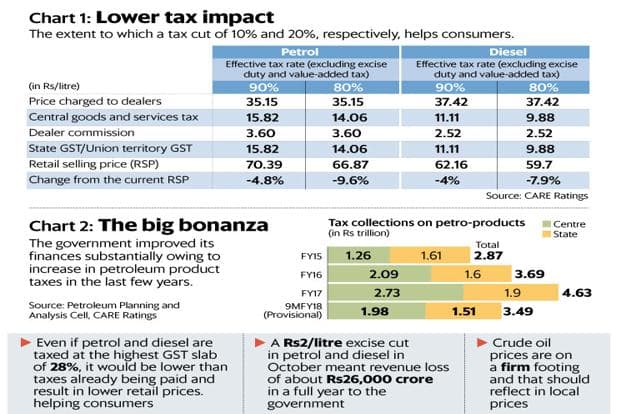 “Assuming the price charged to the dealers, the exchange rate and dealer commission to be constant, there would be a decline in the retail prices by approximately 5-10% in petrol and 4-8% in diesel based on these two scenarios," said CARE Ratings in a note on 4 April.

But the road ahead may not be so easy. Problem is, state governments derive a lion’s share of revenues from sale of these fuels and bringing them under the GST ambit would mean a sharp decline in revenue, which then will have to be compensated.

In an ideal situation, petrol and diesel should be brought under the GST net, says Upasna Bhardwaj, senior economist at Kotak Mahindra Bank Ltd, adding, “Getting the states’ consensus on this would be a key challenge given the amount of revenues they will have to forego."

Chart 2 shows the government’s tax revenue earned on crude oil and petroleum products in the last four years. CARE Ratings says that during fiscal year 2017, 89% of the total came from excise duties and the balance from crude oil cess and customs. Similarly, for the states, 88% of the total came from state VAT (value-added tax) levied on petroleum, and oil and lubricants products, and the balance from royalties, crude oil cess, octroi and duties.

What can be the way out?

In the developed countries, largely in addition to excise taxes/federal duties, GST is also levied on gasoline (petrol/diesel), pointed out Anita Rastogi, partner (indirect taxes) at PwC India. “So India could also explore the possibility where the VAT continues (being a state levy) and instead of central excise, GST is charged," she said. This will help because, according to Rastogi, states will continue to get their VAT revenue and a GST levy (instead of excise duty) will enable the businesses to get input tax credit.

The current high petrol and diesel prices come at a time when overall revenue collections from GST have been erratic. Taking an excise duty cut now will add further pressure on government revenues. A Rs2 a litre excise cut in petrol and diesel in October meant revenue loss of about Rs26,000 crore in a full year to the government.

When crude oil prices started falling in 2014, the current government retained a large part of those benefits by raising excise duties, thereby improving its own finances. Increasing fuel product taxes is an easy way for the government to raise money to meet its expenditure.

Some tax experts and economists reckon that since an impact on revenues is inevitable if there’s an excise duty cut, the government should seriously contemplate including petrol and diesel under the ambit of GST.

But as mentioned earlier, this is no easy road to tread.

It’s worth noting that crude oil prices are on a firm footing and that should reflect in local prices. “With crude oil price increasing, the choice is between lowering the tax rate or increasing subsidy," says CARE Ratings. Lastly, the government will also have to keep the forthcoming elections in mind and understand that lower fuel prices do fetch brownie points.