"storyDirectUrl"
OPEN APP
Home / Market / Mark-to-market /  What will be the impact of GST on inflation?

What will be the impact of GST on inflation?

India’s goods and services tax (GST) dream has finally come true. However, the bone of contention—the GST rate—remains. A revenue neutral rate (RNR) of 15-15.5%, as suggested by a committee headed by chief economic adviser Arvind Subramanian is not expected to impact inflation significantly.

Many economists anticipate minimal impact on consumer price inflation if the standard GST rate is at 18%. A Nomura report estimates it to impact headline CPI (Consumer Price Index) inflation by 20-70 basis points (bps) and core CPI by 10-40 bps in the first year of implementation. That would be on account of higher prices of electricity, clothing and footwear, health/medicine, and education after accounting for input taxes, it says. 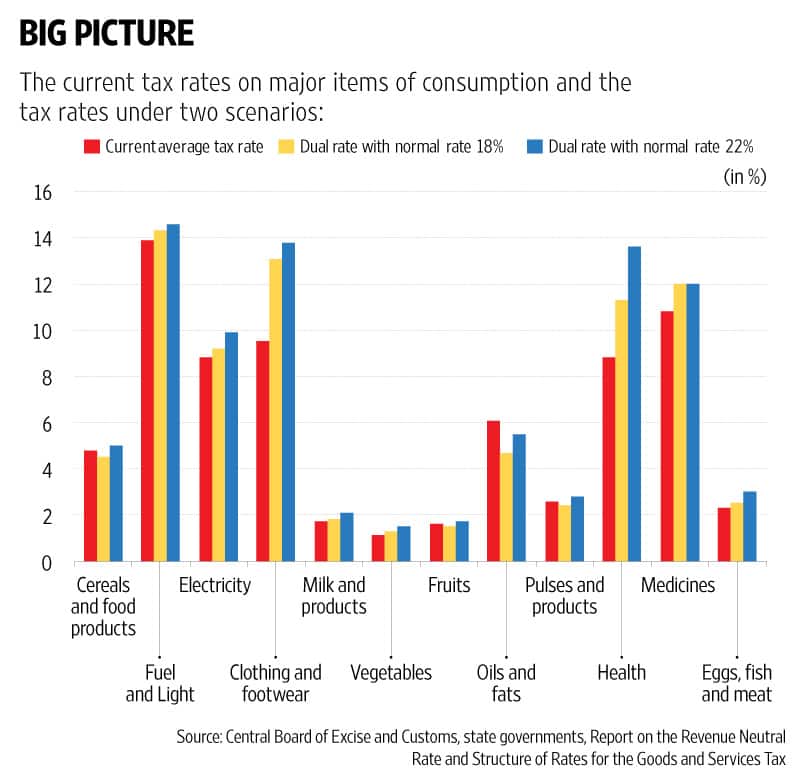 If the rate is around 22%, then ministry officials project inflation to accelerate 30-70 bps.

While the debate on the GST rate is still on, the potential inflationary impact on various product categories under two scenarios—GST rate at 18% and 22%—can be understood in the chart.

Both these scenarios have been analysed by the Subramanian panel.

The panel looked at three scenarios. The first one with a single rate GST of 14% with no exceptions; the second with a low rate of 12%, a standard rate of 18%, and a high rate of 35%; and the third is Scenario 2 with just the standard rate changed to 22%. The first option is more or less ruled out. The chart shows the current tax rates on major items of consumption and the tax rates under Scenarios 2 and 3.

Food items like cereals and vegetables will get more expensive with ‘oil and fat’ being an exception. Essential items like health services and medicines will bear the brunt, whether GST rate is capped at 18% or 22%. As of now, products like alcohol and petroleum have been kept out the GST ambit; clarity is yet to emerge on whether there will be more exemptions. Tobacco and tobacco products are likely to attract more tax.

In the past, countries which opted for GST were faced with a scenario of high inflation and slowdown in consumption initially. Whether that history will be repeated in India depends on a host of factors, the most important being the standard rate of GST finally agreed upon.

Also, as the Subramanian panel report notes, “An RNR of anything beyond 15-15.5% will likely result in a standard rate of about 19-21%, which would make India an outlier amongst comparable emerging economies... Our recommendations would still place India at the upper end of the standard rates found across comparable countries. It is worth emphasizing that the GST is intrinsically a regressive tax and the higher the rate the greater the regressivity."