India-Japan business ties are at an all-time high

“Such gestures gave a lot of importance to the business communities of both the countries," said Bhargava, who is a member of the India-Japan business forum. “In those meetings, both the leaders met all the delegates individually and listened to their issues." 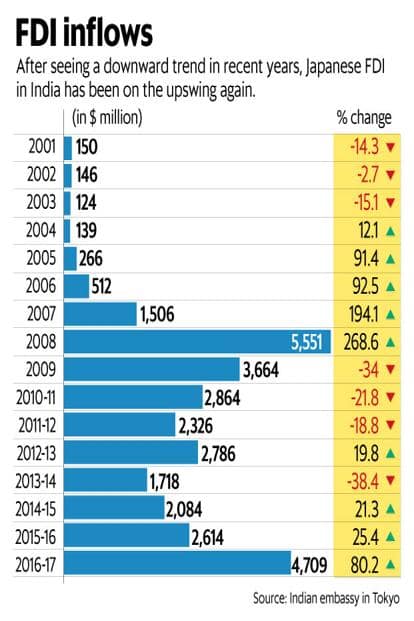 Bhargava was instrumental in forging a joint venture between the then Maruti Udyog Ltd and Suzuki Motor Corp. in 1983 when the Indian government wanted to build a people’s car —Maruti 800.

He thinks relations between the countries are now warmer than ever. “Earlier, I don’t think there was the same level of closeness, even during the regime of Dr. Manmohan Singh and his Japanese counterpart. It is a very high point for India and Japan," he added.

Foreign direct investments (FDI) from Japanese companies in India put Bhargava’s observations in perspective. FDI from Japan, which was at $150 million in 2000-01, reached $5.5 billion in 2007 because Japan’s Daiichi Sankyo Co. Ltd acquired Ranbaxy Laboratories. Japanese investments started to decelerate in the following years and stood at $1.71 billion in 2013-14, shortly before Modi took over as prime minister. But after that, there has been a phenomenal surge. At the end of 2016-17, FDI inflow from Japan rose 80% to $4.7 billion from a year earlier, according to data provided by the Indian embassy in Tokyo.

According to the Confederation of Indian Industry (CII), as much as 48% of Japanese investment has gone into the auto sector and the rest in sectors such as metals, financial services, chemicals, transport, chemical and information technology.

Bharat Kaushal, managing director of Hitachi India and former chairman of Sumitomo Mitsui Banking Corp. (SMBC), is bullish. “Over the years, economic engagement has transitioned from G2G (government to government) to more cross border inorganic engagement of part stake and full stake. The private sector in Japan is keen to invest in a growing economy like India, and these investments are already 13-14% by volume. This is a good opportunity for India to leverage Japanese technology to move up in the value chain of industrial and digital activity," Kaushal said.

According to a CII presentation, which Mint has reviewed, as many as 15 large Japanese firms plan to enter India. These include Sojitz Corp., Tokyo Century Lease and Kawasaki Heavy Industries.