Home / Money / Personal-finance /  91% millennials make their own financial decisions, only 56% invest in mutual funds
Back
Share Via

91% millennials make their own financial decisions, only 56% invest in mutual funds

While millennials are generally seen as the “high on risk" generation, they don’t seem to exhibit that when it comes to financial planning, according to a report by BankBazaar, ‘Aspiration Index 2018 - Decoding Indian Millennials’.

While 91% of millennials believe in making their own financial decisions, only about 56% invest in instruments like mutual funds, said the report. In comparison, 57% of them invest in fixed deposits, a preferred instrument for risk-averse investors, and 36% in Provident Fund and Public Provident Fund accounts.

“The fact that many have invested in areas, including mutual funds and insurance, suggests that there is an overall improvement in (financial) awareness levels," said Adhil Shetty, CEO, BankBazaar. 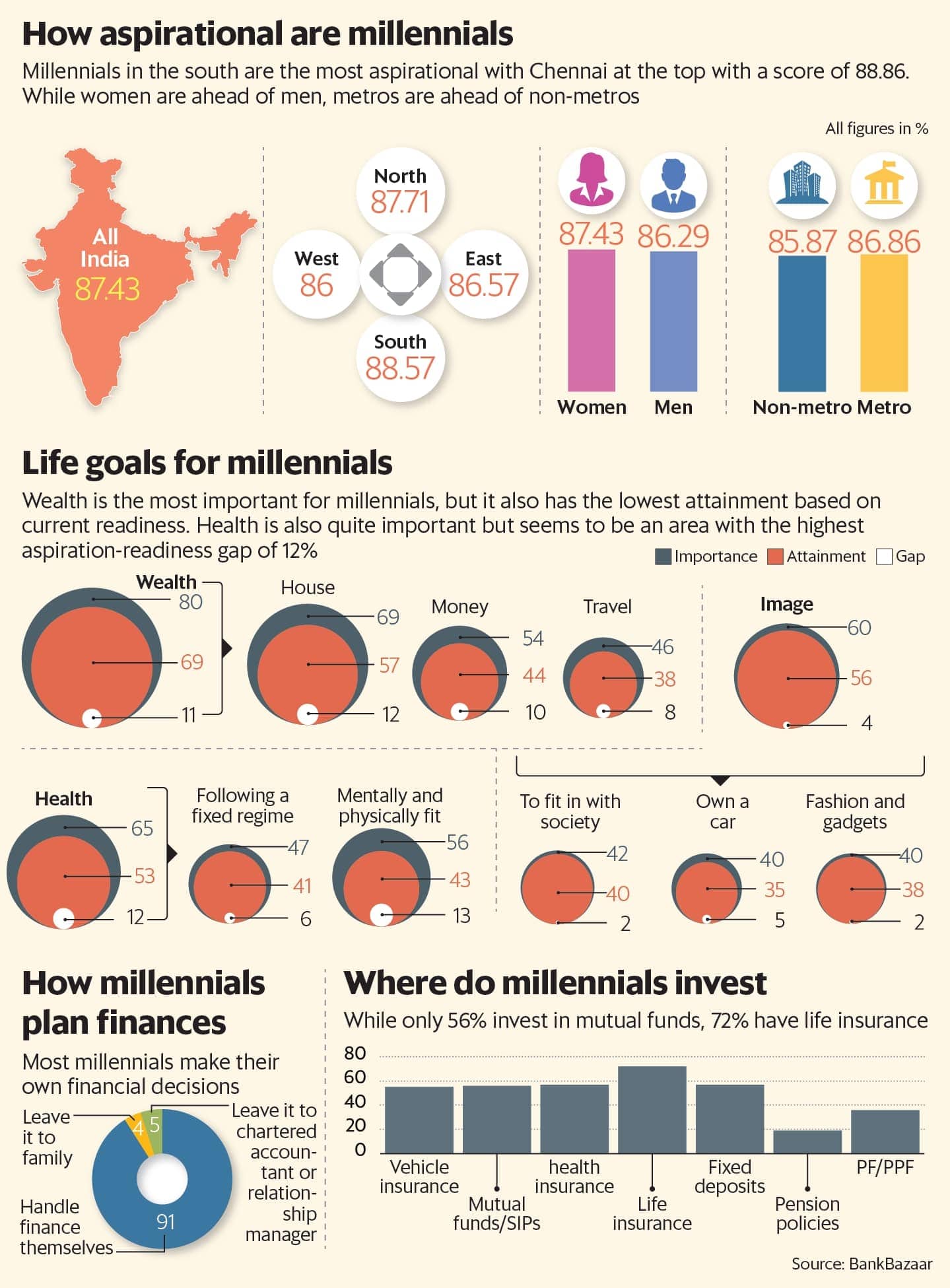 The study covered 1,550 millennials across 12 major Indian cities. It included salaried persons in the age group of 25-35, who have shopped online at least once in the past month and earn at least ₹ 30,000 per month in metros and ₹ 20,000 in non-metros.

Millennials in south India emerged the most aspirational, at 88.57%, against the national average of 87.43%. “This can be attributed to various reasons including higher levels of literacy and access to opportunities in the region," said the report. Within south India, Chennai topped the aspiration index with 88.86% millennials clear about what they want, and believe they are in a favourable position to turn their aspirations into reality.

The data for women is heartening, with women scoring 87.43% against 86.29% for men. “Growing career choices for women provide them more avenues for financial independence. This, combined with a steady shift in societal norms, makes women feel that they can both dream and achieve," said the report.

While 80% millennnials chose wealth as the top life goal, relationship and fame tied up at second place, with 66% voting for each. Health is also fairly important for millennials with 65% choosing it as a life goal, followed by personal growth (63%) and image (60%).

Owning a house is the most important aspiration for millennials, quite like the previous generation.

“But in what is a departure from the previous generation, millennials rate highly things like foreign travel, keeping up with the latest fashion and gadgets and saving for a lavish wedding (among those who are single)," said Shetty.

However, “skyrocketing real estate prices have made home ownership in most cities an elusive dream for most. Travel, on the other hand, has become more affordable," said the report.

Owning the latest gadgets and staying trendy matters to millennials’ self-image, but buying a car is equally important to them.

Overall, millennials are high on aspirations and seem confident about achieving them.