Weighing on the demand is weak or low off-take from user industries such as the cement industry, which is using petcoke as an alternative, metals and thermal power industries

In a dramatic turn of events, Coal India Ltd, the biggest producer of coal in India, is facing difficulty in finding sufficient buyers on its e-auction platform. In July, only 68% of the coal offered in e-auction found takers, a note from Motilal Oswal Securities Ltd says. In July 2014, that ratio was at around 90%.

The three-month average reading is better, but the trend is inescapable. The ratio of average allocation to the offered quantity fell from 91% last year to 73% this year. To be sure, the offered quantity has always been greater than the actual off-take. But the gap has not widened this much in recent years (see chart).

Driving the ratio down is increasing production and stagnant demand. Coal production in the three months to July rose 10%, better than the 4% growth that Coal India saw in the year-ago period. This is helping the company route a larger amount of coal for e-auction. But demand remained stagnant at around 5.5 million tonnes (mt), the Motilal Oswal note says. 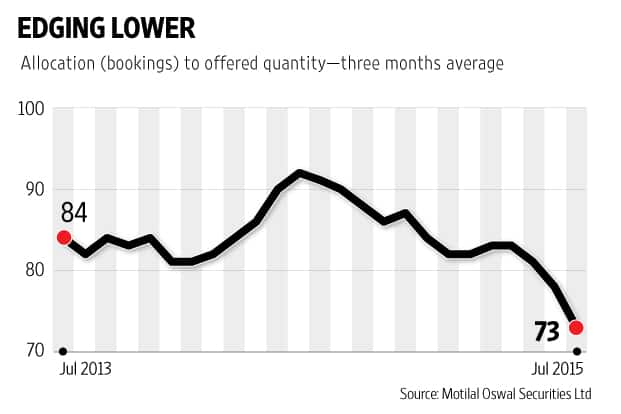 Weighing on the demand is weak or low off-take from user industries. Companies in the cement industry are using petcoke as an alternative to coal, an analyst says. The demand from the metals industry, namely sponge iron, has fallen due to unfavourable product prices.

The thermal power sector, the other major user of coal, is grappling with poor demand. Generation in the three months to July increased just 2%. Though the sector is operating at ample free capacities, there is no clarity when the state electricity boards, the biggest purchasers of electricity, will step up purchases.

Also, as of 2 September, the coal inventory position at thermal power plants, on an average, is significantly better than a year ago. While an immediate demand boost from the power sector is unlikely, import substitution is one area analysts are banking on now.