In FY11 and FY12, after the Lehman crisis in FY09, mergers and acquisitions to revamp operations was the trend, while in the last fiscal it was more of distressed asset sales

A few days ago, Tata Steel Ltd decided to sell its UK operations. Analysts said this was due to the tough environment and the loan taken to acquire it in 2007. But this was not a one-off. In fact, through fiscal 2016, several business houses such as Essar, Videocon Industries Ltd, DLF Ltd, GVK Power and Infrastructure Ltd and GMR Infrastructure Ltd stripped their assets. Do these high profile cases mean there has been a spurt in asset sales lately?

Data from the Centre for Monitoring Indian Economy (CMIE) shows that although asset sales gained traction in the last six months, the number of deals (120) was not very high. Over the last five-year period, fiscal 2012 recorded the highest number of asset sales, while the year before was more than three times in value terms.

C. Venkat Subramanyam, founder-director of Veda Corporate Advisors Pvt. Ltd, says that asset sales, mergers and acquisitions fructify when there are buyers, too, for assets on the block. Buyers are more willing when macroeconomic indicators and business confidence improve. “Typically, there is a time lag after the equity markets improve," he adds. 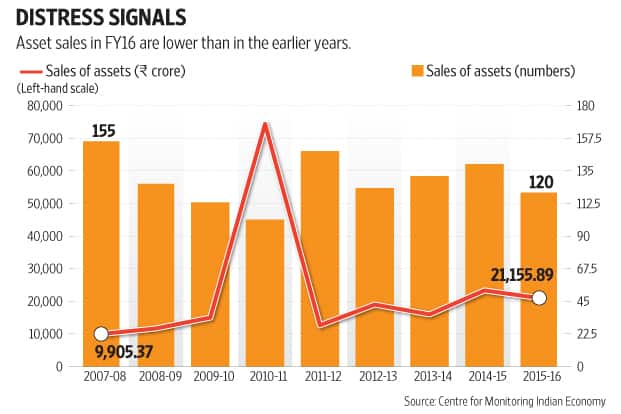 Asset sales, mergers and acquisitions were, therefore, far higher in FY11 and FY12 than in the last two years as the economy bounced back after the Lehman crisis in FY09. Moreover, the domestic economy then was far healthier than it was in the last two years. Investment bankers say that there is a difference in the nature of deals between the two periods. In fiscals 2011 and 2012, mergers and acquisitions to restructure operations was the trend compared with the last fiscal when it was more of distressed asset sales.

A report in March by ICRA Ltd bears out that observation by pointing out that companies’ ability to service debt fell sharply in the last few quarters. About 20% of the 509 companies it analysed had an interest cover below 1 on the back of declining earnings and mounting debt. The report says that most of the firms were in the infrastructure, construction, heavy industry and commodity sectors.