Domestic institutional investors have pumped in a net of Rs4,390.24 crore in Indian shares in October, the highest since August 2013

Mumbai: Domestic institutional investors (DIIs) are set to pump the most money into Indian equities in 14 months in October, led by mutual funds, as individual investors bet on an economic turnaround.

DIIs have pumped a net of ₹ 4,390.24 crore into Indian shares this month, the highest since August 2013, according to Bloomberg data. Mutual funds have invested a net of ₹ 5,193.5 crore, backed by strong inflows from retail investors.

“The medium-term outlook for Indian equities continues to be bright and positive. Macros have improved considerably, reforms and strong policy measures to accelerate investments and capital formation are coming through," said S. Krishna Kumar, head of equities at Sundaram Mutual Fund. 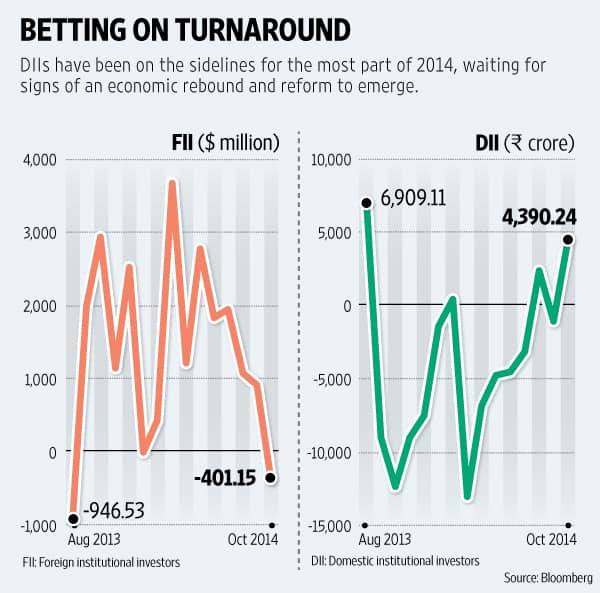 “Weakened crude and commodity prices are definitely a positive. India seems well placed to handle any volatility that may arise from a global liquidity re-adjustment."

DIIs have been on the sidelines for the most part of 2014, waiting for signs of an economic rebound and reform to emerge after growth slumped to decadal lows of below 5% in the last two years. Year to date, DIIs are net sellers of Indian equities to the tune of ₹ 28,209.6 crore.

There have been signs that the economy is on the mend and the Narendra Modi government, which assumed office in May, is serious about pushing reforms. In the quarter ended 30 June, the economy expanded 5.7%—the quickest pace in two-and-a-half years—while inflation has moderated.

Earlier this month, the government said diesel prices will be market-determined, and relaunched the bank transfer of cooking gas subsidy. It has also unveiled business-friendly labour rules to push manufacturing growth and moved to kickstart stalled projects by clearing up a regulatory logjam.

Sundaram Mutual’s Kumar said inflows in mutual funds have been strong over the last six months.

“Retail investors have also come back into equity investing mode. Schemes with a good track record are continuing to get inflows across large and midcap diversified funds," he said.

Mutual funds have been net buyers of Indian equities since May, when the Bharatiya Janata Party-led National Democratic Alliance won the general election with a clear mandate.

“Themes like banking and infrastructure look attractively valued for the next 3-5 years. There is scope for capacity utilization to pace up in many of the industrial and manufacturing sectors." Shah said in an email.

“One can derive valuation comfort by looking into the future because therein lies confidence of an economic recovery in the long term," he added.

Insurance companies seem to be staying away from the equity markets.

“Insurance companies are not net buyers of Indian equities as yet. They are still seeing net redemptions, due to the maturity of Ulip (unit-linked insurance plans) and other equity-linked schemes," said Sampath Reddy, chief investment officer, Bajaj Allianz Life Insurance Co. Ltd.

“Incentive structure needs to be balanced, and not skewed towards traditional policies. Once this is rectified, insurance companies will eventually be net buyers of equities over a period of time," Reddy added.

DII enthusiasm for equities has returned at a time when the interest of foreign institutional investors (FIIs) seems to be cooling. FIIs have withdrawn a net of $401.15 million from Indian shares, the largest outflows since August 2013.

The risk appetite of FIIs has waned in the month of October, said Deven Choksey, managing director and CEO of KR Choksey Shares and Securities Pvt. Ltd.

“This was partly due to sharp fall in oil prices, and resultant collateral losses incurred, and partly due to slowing of economies in Europe and China and fears of rate hikes in the US," said Choksey

Not only India, but other Asian and emerging markets also felt the pressure. Data from Bloomberg show that for the month to date, FIIs have been net sellers in equity markets in Indonesia, South Korea, Thailand, the Philippines and Taiwan.

“FIIs will return in days to come. The outlook for Indian equities is extremely positive The kind of courage the government is showing, people are very confident that this government means business," said Choksey.