Regardless of the controversy surrounding the use of employees’ provident fund numbers to estimate job growth, something is afoot on job growth. The survey-based seasonally adjusted Purchasing Managers’ Indices (PMIs) show that employment has indeed picked up recently, both in manufacturing and in services.

Take a look at the accompanying chart 1. It shows hiring has improved in the manufacturing sector since August 2017, although there has been a slackening in recent months. In the data, a reading above 50 denotes growth, while one below 50 signals a contraction. In services, hiring picked up from May 2017, with two bad months in July and August last year, owing to the introduction of the goods and services tax (GST). Thereafter, job growth in services has been robust. As the chart shows, growth in employment in the services sector hasn’t been this good since 2011. 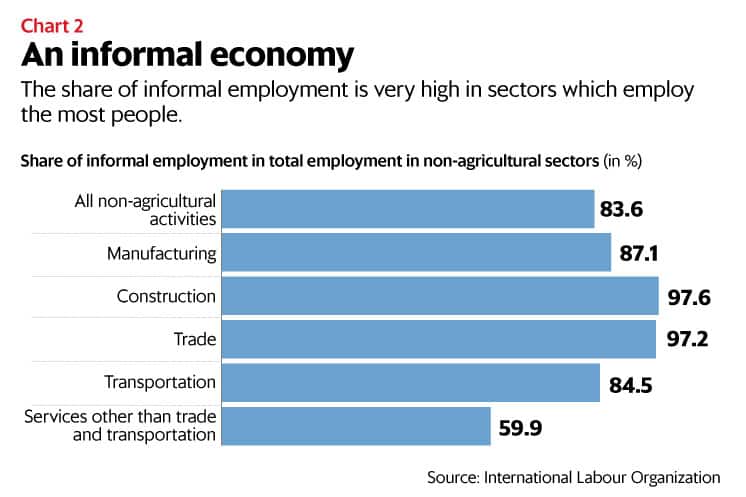 The PMI data also shows that business expectations, both in manufacturing and in services, are improving. Optimism on the economy is one reason for hiring more people. These are signs of an end to the long drought in job growth.

The flip side of the rise in market share of the formal sector is the fall in share of the informal sector, which will entail job losses there. The size of India’s informal sector is huge and a recent study by the International Labour Organization, citing 2009-10 data on the Indian economy, estimated informal employment at 83.6% of non-agricultural employment. The study points out that domestic workers, home-based workers and street vendors together constitute around a third of urban employment in India.

Also, as chart 2 shows, the proportion of informal employment in the sectors that employ the most people is very high. Among non-agricultural activities, 97.6% of construction jobs, 97.2% of jobs in trade and 84.5% of jobs in transportation are informal.

What ultimately matters is whether we are creating decent and productive jobs not only for those joining the labour market but also for those leaving disguised unemployment in agriculture.