Just when auto firms were resetting their growth meters for FY2018 having emerged from the demonetisation and BS-IV compliance blues, the implementation of the goods and services tax (GST) is threatening to disrupt business, again.

Unlike other sectors, it would be the third quarter of pain in a row for auto. If the liquidity crunch created by the note ban led to auto sales contraction in the December quarter, offloading BS-III inventory led to dip in profits and margins in the March quarter.

And now, there is likely to be some pain for both auto dealers and the firms before gain from GST too. As GST rolls out on 1 July 2017, automobile dealers can claim only about 60% input tax credit on unsold pre-GST stock held until then. This means that they would incur a loss to the extent of the balance 40% credit. The bad news does not end there. Dealers, fearing the time-consuming tax adjustments between the pre- and post-GST regime, are doling out hefty discounts to clear existing stock. 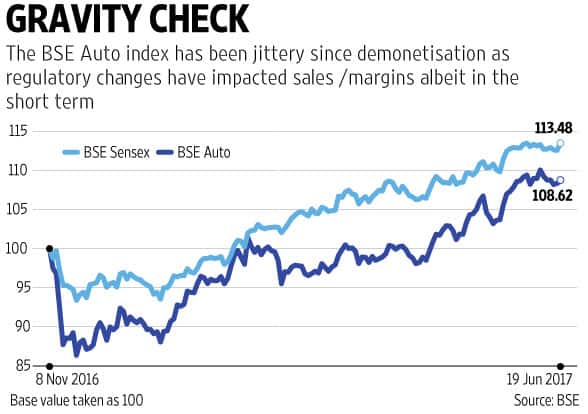 The moot question is: will companies compensate dealers for these regulatory backlashes? Although auto firms are unwilling to speak on record, some dealers of a leading passenger carmaker say that they would be compensated based on sales performance. Likewise, two-wheeler firms are also inclined to aid dealers, at least partially, for any GST-linked losses.

Another fallout of GST transition is the dealers’ reluctance to lift fresh vehicle stocks until July, which may moderate sales for the June quarter. However, companies and auto component firms have not cut back on production schedule, which indicates confidence that demand may make good the sales in the later months.

Certainly, the financial support extended to dealers will weigh on the company profit margins. Add to this, input cost increase seen in the last three to four quarters may weigh on margins with a lag. Analysts too echo this sentiment and see only a blip in profitability given the decent forecast of 8-12% for passenger cars and two-wheelers in FY2018. There could be more pain for commercial vehicle firms where sales growth has been south-bound.

The point here is that auto sector revenue has had a rough time continuously for about six months on account of regulatory changes. While two-wheelers and CV (commercial vehicle) sales were dented severely both due to demonetisation and BS-III inventory clearing, cars were a tad better off. Operating margins slipped in the December and March quarters, as lower sales, discounts and higher costs incurred took a toll.

Investors have turned cautious and may wait to see the near-term business disruptions due to GST. Note that the BSE auto index, which is normally an outlier in good times, has steadily underperformed the BSE Sensex since 8 November 2016, when demonetisation was announced. One hopes that good monsoons would be the manna from heaven that will offset this pain during FY2018.