Will your online plan pay the claim?

As long as you make proper disclosures and fill up the proposal form accurately, you shouldn't worry

It’s a fact that term insurance policies that are sold exclusively online have become much cheaper than their offline versions. On an average, online term plans are almost half the price of an offline term policy.

Such steep reduction in premiums is largely due to the costs that insurers save by moving their plans online. “On an average, a term plan pays about 20-25% as commissions to the agents. Online, that’s a straight saving. Plus, there is no cost in managing the distribution channel. You also save on cost by moving the paperwork in electronic form," says Rajit Mehta, executive director and chief operating officer, Max Life Insurance Co. Ltd. The company does not have an online term plan currently.

But as more insurers queue up to sell online term policies, we notice a price war of sorts. For instance, for a given set of parameters, Aviva Life Insurance Co. India Ltd offers its online term plans cheaper by about 70% (see graph) as compared with its regular policy sold by an agent.

While this has definitely led to a better price proposition for the customers, it has also rung alarm bells in the industry. A few in the industry believe that such rock bottom premiums will not be sustainable and will impact the claims settling abilities of these companies. “I think online term plans are not scientifically priced. It will be very difficult to make profits from such low premiums. Also, these premiums are not based on the mortality experience of the insurer. Hence this can potentially affect the claims settlement of the insurers," says P. Nandagopal, managing director and chief executive officer, IndiaFirst Life Insurance Co. Ltd. IndiaFirst has an online term policy that offers a sum assured up till 49 lakh and is cheaper by 10-20%. 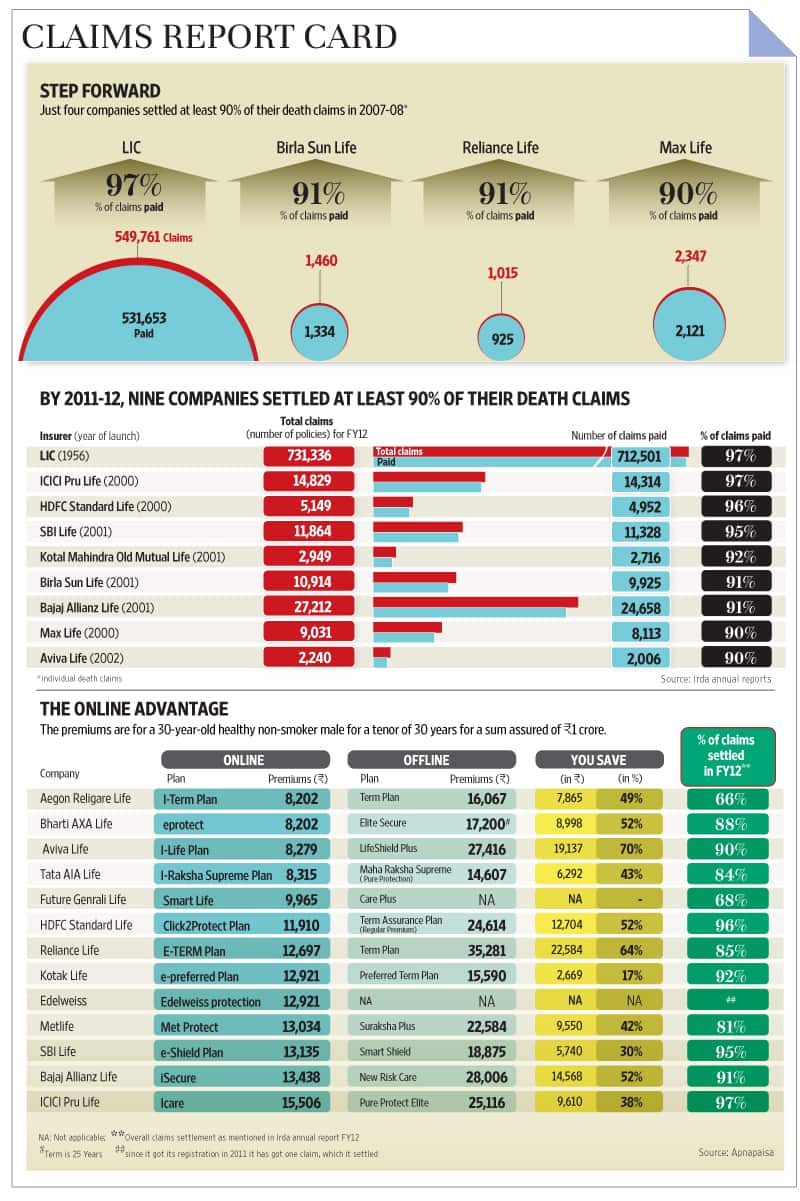 It is too early to say whether low online premiums will impact claims settlement and there are two reasons for that. First, lack of data. Insurers usually don’t segregate their claim settlement record across products and the Insurance Regulatory and Development Authority (Irda) also publishes a consolidated figure in its annual report.

The second, and the most important, reason is that most of these online policies have been sold only in the last few years. “Insurers have six months to investigate and settle an early claim that comes within the first two years of the policy. For policies older than that the claims need to be settled in 90 days," says Balram Sarma, chief (operations), Future Generali India Life Insurance Co. Ltd. Hence, the chances of claims rejection are highest in claims that are made early in the policy when the insurer carries out thorough investigation.

But if the online experience of the insurers is anything to go by, policyholders should not be too worried about the claims settlement capacity of their insurers. “The kind of profile of customers we get online is extremely good. The disclosures they make are outstanding and, therefore, our claims experience is likely to be far better," says Rajeev Kumar, chief and appointed actuary, Bharti AXA Life Insurance Co. Ltd. Life insurance contract between you and your insurer is based on good faith. You need to disclose all material facts regarding yourself and your health. Suppression or lie of any sort means the insurer can refuse paying you the claim.

So what leads to more disclosures? Interestingly, the answer is the lack of agents. “The risk assessment in online policies is better. That’s because there are no intermediaries involved. We have seen the number of declarations is far higher in online plans than offline—that’s because the customers are filling up the proposal form themselves," says Sarma.

Insurers that have the experience of selling policies online mostly agree that agents tend to misguide policyholders at the time of buying an insurance plan in order to escape time-consuming processes like medical examinations. Although this makes the buying process a lot easier, but results in claims rejection, especially if it’s an early claim.

The other reason is the size of cover that people buy online. “The average sum assured for online term plans is 70 lakh. This means most of these policies anyway need medical examination to establish the health record of the policyholder. This is not so for a large number of offline policies where the sum assured is usually very low," says Yateesh Srivastava, chief marketing officer, Aegon Religare Life Insurance Co. Ltd. The average sum assured of the industry is 1.3 lakh.

Aegon Religare was the first company to launch a pure online term product in 2009, but their claims settlement experience is not very encouraging. According to Irda’s latest annual report, in FY12, Aegon Religare settled 66% of its claims and repudiated 32% of them. This figure was worse in FY11, when it settled 52% of its claims and repudiated almost 45% of the claims.

Could it be that the pricing of their online plans has indeed affected their claims settlement? “This is largely because our book is still young and most of our claims are early claims. Also, for a large portion of our claims, we have noticed deliberate fraud. But these are mainly offline policies.

The claims settlement ratio for our online policy is much higher," explains Srivastava. According to their website, the company had so far received 14 claims from its online insurance plans and it has repudiated only two of them. This repudiation is due to the fact that the policyholder did not disclose his health conditions accurately.

The picture gets better when you zoom out from online policies and look at claims settlement of insurers at large. According to Irda’s FY12 annual report, there are about nine insurance companies that have settled at least 90% of their claims as compared with five in FY11 and three in FY10.

“This is largely because the industry focused on customer acquisition initially. Customers didn’t have adequate knowledge on documentation and that’s improved immensely as has agents’ training. Plus, insurers now have their own underwriting and mortality experience and are not completely dependent on Life Insurance Corp. of India’s mortality table," explains Mehta.

But there are still a few who have a poor claims settlement record. According to the annual report of Irda, in FY12, there are about five insurers that have settled less than 80% of their claims. For instance, Shriram Life Insurance Co. Ltd, which started operations is 2005, settled only 65% of its claims in FY12. “We sell our policies largely to tier III and tier IV cities and so we offer them easy underwriting. Otherwise they will be left out. But we are strict at the time of claims. This experience is largely in our retail portfolio. For our group policies our claims settlement is 100%," says Manoj Jain, chief executive officer and whole time director, Shriram Life.

In addition to relaxed underwriting, early claims also contribute to a high rejection rate. DLF Pramerica Life Insurance Co. Ltd, which launched in 2008, settled only 24% of its claims in FY12, the lowest in the industry. Further, it refused 17% of its claims and 59% of the claims are pending in FY12. “Since 59% of our claims are pending, it means they can go either way. But 17% of the claims that we have repudiated are all early claims. During an early claim, the investigation is very thorough because the chances of fraud are the highest," says Sujata Dutta, senior vice-president, head marketing and affinity sales, DLF Pramerica Life.

What it means for you?

So essentially you are left with two questions. One, are online premiums sustainable? Two, will online policies pay the claims? While it’s too early to say if premiums of online term policies are sustainable, there is a good chance that genuine online claims will not be rejected. “The insurers can get the pricing wrong and then they will need to revise the premiums upwards, but this will not mean a rejection in claims especially given the profile and experience from online customers," says Kumar.

Also, with an active redressal mechanism instituted by the regulator and the changing focus of the insurers, there is a good reason to believe that genuine claims will not be rejected.

However, you also have a role to play here. You should make proper disclosures and make sure that you fill up the proposal form accurately. Also, you should not shirk medical tests. A complete assessment of your health is needed to underwrite you properly.