How safe is your money with crypto exchanges

There are primarily two types of crypto exchangescentralised and decentralised. However, using either has some pitfalls in terms of the safety of your crypto assets

If you are an investor in crypto assets, recent reports of a hack may have worried you as to the safety of the assets you have acquired till now.

Last week, Coinsecure, a centralised crypto exchange operational in India, put out a notice on its website claiming loss of 438 bitcoins. Though the exact nature of the loss and how it happened is still being investigated, the details put out by the exchange suggest that the company’s chief scientific officer claimed his computer was compromised.

The safety of your assets largely depends on the crypto exchange through which you transact. There are primarily two types of crypto exchanges—centralised and decentralised—but both come with their own pitfalls in terms of safety.

A centralised crypto exchange, like Coinsecure, is like a third party or a middleman that facilitates crypto-to-crypto or crypto-to-fiat (regular money) transactions between entities or individuals.

While doing so, it stores crucial information like private keys to a crypto asset and funds. A private key is like a complex password that is required to spend the cryptocurrency you own.

Also, these exchanges follow know-your-customer (KYC) practices, in accordance with the laws of respective geographies. This means that in order to transact through a centralised exchange, the users also have to identify themselves.

Since a large amount of customer data, including private keys, is stored with these exchanges, they attract hackers. There have been cases where hackers have stolen crypto assets worth millions of dollars. 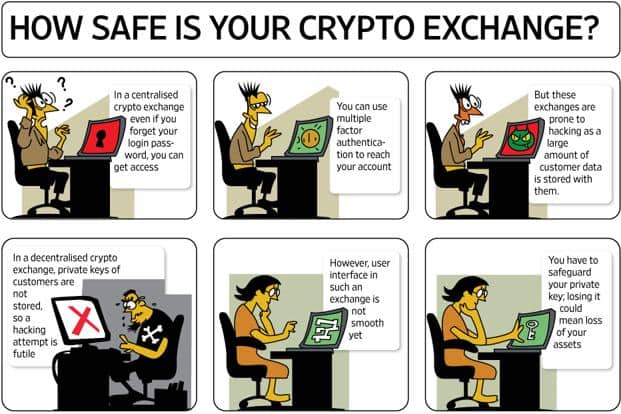 In recent times, some exchanges have refunded investors using their own funds. In March, Japan-based virtual currency exchange Coincheck said it had refunded more than $440 million to customers using its own funds, following a hack. Coinsecure too has said that if it fails to recover the lost bitcoins, it will repay its customers, though 90% of the repayment will be in rupees.

These exchanges are mostly used for crypto to crypto transactions, though newer models are also emerging that assist in crypto to fiat trades also. The key difference between centralised and decentralised exchanges is that the latter does not store private keys of customers, making a hacking attempt largely futile. Transactions are peer-to-peer, initiated and settled between two individuals.

“All cryptocurrencies are a combination of a public and private key. So basically in a decentralised exchange, these private keys are stored with the user itself and not a centralised server like ours right now," Thakral said.

Praveen Kumar, chairman and chief executive officer of Malaysia-based Belfrics Global SDH, which operates bitcoin exchanges in various countries, said decentralised exchanges being more safe is true to the extent that there isn’t a single point of attack. “But if you lose your private key or hardware device that you use to save your keys, your crypto asset is completely gone. This itself is a major risk," Kumar said.

Protecting your private keys while using decentralised exchanges is a concern highlighted by experts. Even if users use a hardware wallet to store keys, they can lose their crypto assets if they forget the wallet key. Subsequent incorrect attempts to unlock the wallet could mean getting locked out.

On the other hand, centralised exchanges can grant YOU access to your private keys using multiple factor authentication since they have your details through KYC. “While a centralised exchange can lose a few hundred bitcoins in a hack, there is a higher possibility of a thousand people losing 1 bitcoin each if they are unaware of the technology (in a decentralised exchange)," said Thakral.

Another factor is liquidity, which is important for a smooth and quick transaction. “The technology is still evolving and currently the volume on decentralised exchanges is very low. Liquidity is a major issue on these at present," Kumar said.

The Reserve Bank of India (RBI) as well as the Indian government have indicated their reluctance towards cryptocurrency. Earlier this month, RBI barred its regulated entities from facilitating crypto-to-rupee transactions.

While those who are already invested in crypto assets may not be convinced to exit their holdings yet, they should consider the associated risks. New users should avoid investing in crypto assets.