With India’s exchange-traded currency derivatives market, what you see is not what you get. Reported volumes and open interest have risen 73% and 115%, respectively, since mid-2014, after regulators relaxed some of the draconian measures they had taken in 2013.

Open interest across exchanges has risen to fairly healthy levels of $5.6 billion, or only about 20% lower than the pre-crackdown days. But this doesn’t mean that the market is flourishing. The proportion of end-users who use the market to hedge foreign exchange exposure has come down significantly. In its heyday, the exchange-traded currency derivatives market had become particularly attractive to Indian companies for hedging foreign exchange exposure. Small-sized companies preferred the platform’s transparency. And thanks to an increase in open interest, larger companies could take positions of up to $250 million, since, back then, a client’s position limit was set at 6% of the exchange’s position limit.

But now, a company can take a position of only $10 million, which will soon be increased to $15 million, according to the central bank’s latest monetary policy statement. Not surprisingly, companies left the market in droves, and the mere $5 million increase is unlikely to bring them back. According to the head of the currency desk at a leading brokerage, while his firm would service 50-60 companies a day before the crackdown, the number is now about 10. 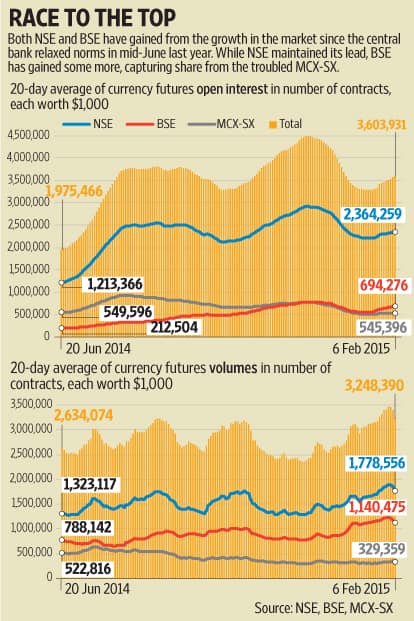 While the crackdown was initiated under the previous central bank governor, the current governor, Raghuram Rajan, also appears to have betrayed his reputation of being pro-reform and supportive of the more transparent exchange-traded markets. In his report on financial sector reforms to the government in September 2008, he wrote, “In (permitting exchange-traded currency derivatives), it is important to avoid special rules which inhibit participation of banks, NRIs, FIIs, and to avoid forced segmentation of the market where large positions are prohibited in order to avoid competitive pressure against the OTC (over-the-counter) market."

But the new position limits do the exact opposite. And while the central bank allowed participation by foreign investors last year, the various restrictions imposed have meant that interest from this segment is close to nil.

So how have volumes and open interest risen in the past few months? To the central bank’s credit, last June, it removed the stricture that commercial banks couldn’t trade on their own account on exchanges. This immediately led to a rise in open interest (see chart). In options, open interest has more than trebled since then.

Of course, BSE Ltd’s entry into the segment a little over a year ago has driven overall volume as well. For a year, BSE didn’t charge any fees, and since December it started charging ₹ 2 for every ₹ 1 crore worth turnover; on only active orders, and not on passive/limit orders. National Stock Exchange (NSE) charges ₹ 110 for every ₹ 1 crore worth turnover for both sides of the trade.

Apart from lower costs, BSE claims to offer participants a much faster trading platform, procured from Deutsche Borse. Whether or not it makes money from the venture, it has certainly attracted volumes. In the options segment, it has overtaken NSE by a long shot, even though its open interest remains a fraction of total trades.

In the process, it has caused NSE to reduce fees to some extent for large traders on its platform. Of course, the differential is still huge and it seems unlikely that it will want to interfere with trading fees substantially. Even though BSE’s volumes have grown faster, NSE hasn’t lost share in the futures segment (see chart). In the options segment, while it has lost share, its own volumes have grown at a brisk pace of about 150% since June 2014.

Of course, both have gained at the expense of MCX Stock Exchange, which wasn’t allowed to launch fresh contracts between September 2014 and January 2015. During this period, it lost considerable share, though it has done well to maintain its open interest levels in the futures segment.

Apart from the blip in MCX-SX’s numbers, the overall market has grown handsomely. But policymakers must wake up to the reality that the increasing volumes don’t necessarily point to a healthy market. Client positions must be relaxed and paperwork should be made less onerous, so that Indian firms can hedge increasing amounts. There has been talk of extending trading hours, to accommodate hedges by traders who are active in late evening trading sessions of commodity exchanges. These steps must be taken sooner than later.

Policymakers must realize that Singapore Exchange is aggressively building its dollar-settled rupee-dollar contract. As pointed out last week, India’s response can’t be to merely provide a possible alternative out of Gujarat’s Gift City, where participation may be limited to a few categories.

The response should be to build a wholesome exchange-traded market, with varied trading and hedging interests.