While higher global growth is expected to improve exports, it hasn't happened so far

The chart shows the difference between India’s merchandise exports of non-petroleum products and its imports of goods other than oil and gold and silver. In some ways, this yardstick is a gauge of the competitiveness of Indian industry.

The chart shows there has been hardly any increase in the realizations from exports of non-petroleum products over several years. For instance, exports of these products in January this year were lower than in January 2014 or in January 2015. Part of this is due to lower commodity prices, but it’s also a reflection of lack of improvement in export performance.

On the other hand, imports of goods other than gold and crude oil have gone up by leaps and bounds. This is particularly true for the past one year.

Drilling down into the numbers, several trends are visible. For instance, Emkay Research says, “imports-led substitution is likely to drive domestic consumption since consumer durables production has been steadily declining since Dec 2016. We see clear evidence from electronic goods imports, which grew by 12.2% y-o-y (year-on-year) and are in contrast to a subdued domestic production of consumer goods." That may be a reason for the protectionism displayed in this year’s Union budget. 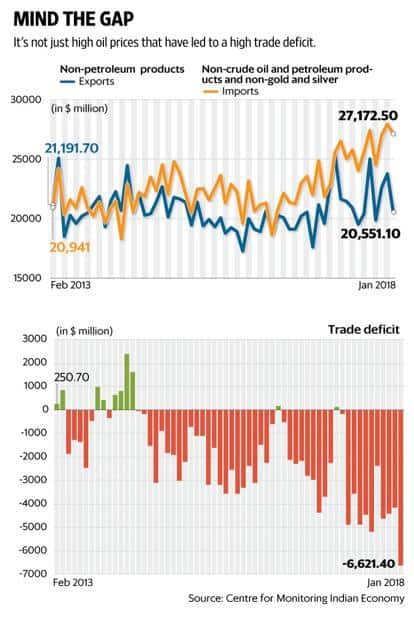 More importantly, several analysts have said the rise in imports is a reflection of the disruption caused by demonetisation and the introduction of the goods and services tax (GST).

A report from Edelweiss Equity Research says, “Historically, prior to GST regime, labour intensive exports and imports moved in tandem; however, in the past six/nine months, labour-intensive exports have slowed, while imports have jumped. This indicates supply chains of the sectors are yet to fully recover from GST-led disruptions."

The slowdown in labour-intensive sectors, too, could be the result of disruptions caused in the informal sector. As a result of these trends, the negative trade balance is increasing and, as the chart shows, it’s not just because crude prices have moved higher.

Gaurav Kapur, chief economist at IndusInd Bank, expects the current account deficit to rise to 2.8% of gross domestic product (GDP) in the third quarter of the current fiscal. This could be a reason for worry if the volatility in capital flows persists.

While higher global growth is expected to improve exports, it hasn’t happened so far. More importantly, these trends raise a question mark over the competitiveness of Indian industry.