Mumbai: As part of a rout in global equities, the Indian capital markets, too, slipped to a two-week low on Tuesday, as news of escalating trade tensions between the world’s two largest economies rattled investors. 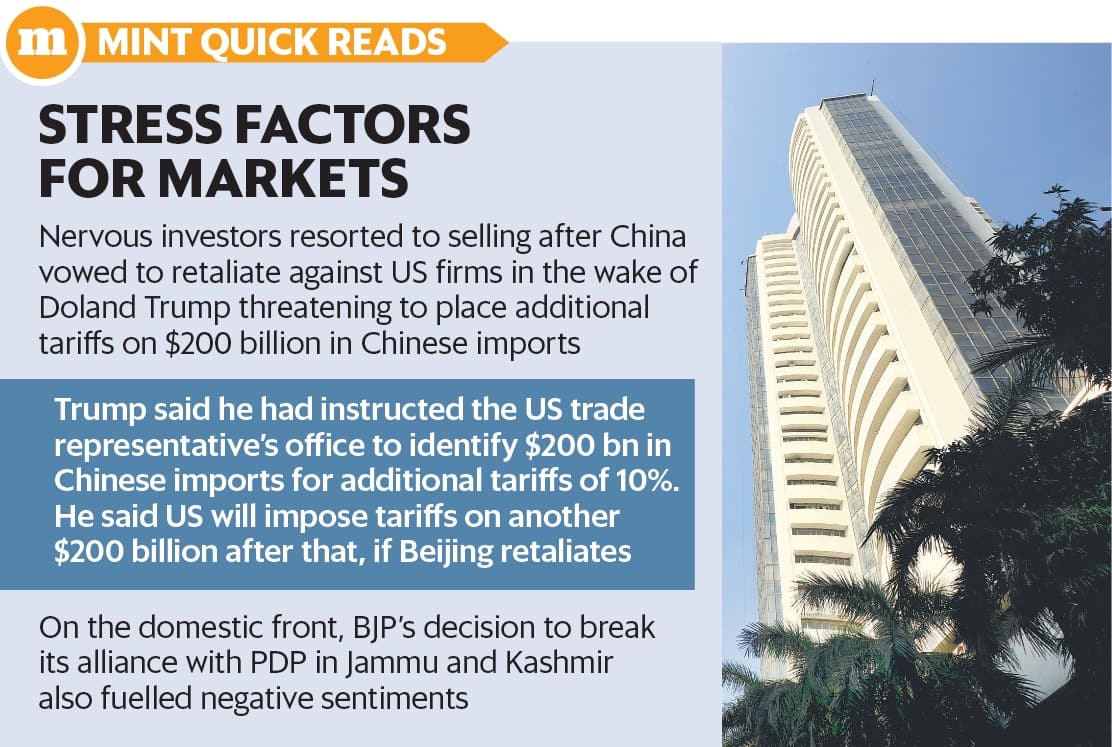 After China vowed to retaliate against US companies after President Donald Trump threatened to place additional tariffs on $200 billion in Chinese imports, nervous investors resorted to selling, which dragged the markets down the world over.

China’s Shanghai slipped 3.82%, Hong Kong’s Hang Seng fell 2.78%, Japan’s Nikkei was down 1.77%, while South Korea’s Kospi declined 1.52%. In a White House statement on Monday evening, Trump said that he had instructed the US trade representative’s office to identify $200 billion in Chinese imports for additional tariffs of 10%. He said the US would impose tariffs on another $200 billion after that, if Beijing retaliates.

Hemang Jani, head-advisory, Sharekhan by BNP Paribas, said that Indian indices closed weak after trade tensions between the US and China escalated.

“On the domestic front, the Bharatiya Janata Party’s decision to break its alliance with the Peoples Democratic Party in Jammu and Kashmir also fuelled negative sentiments. Overall, we maintain a positive view on the market and believe that it may be volatile in the short-term, owing to rising oil prices and a depreciating rupee."

According to Vinod Karki, vice-president, strategy, ICICI Securities Ltd, the news flow is not anything which is surprising and, to some extent, it was already factored in. “As compared to other emerging markets, India is still up in rupee terms this year. The trade war is threatening, but not so risky for India.

More than that, higher oil prices will be a deciding factor for Indian markets and foreign institutional investor (FII) flows into India. There are lots of uncertainties for India in the near-term as crude oil prices continue to rise."

From a global perspective, India remains one of the fastest-growing major economies, but higher crude prices can derail the domestic growth story, said Karki.

So far this year, foreign institutional investors have sold shares worth $650.61 million.

However, domestic institutional investors (DII), including mutual funds and insurance firms, have bought Indian shares worth ₹ 56,433.02 crore in 2018 so far.

“Risks of escalation in actions and a more meaningful impact on global growth have thus risen," it said in a note on 18 June.

After Trump said that he will push ahead with hefty tariffs on $50 billion of Chinese imports last week, Morgan Stanley had said that the US tariffs alone are expected to affect about $109 billion of imports, which is equivalent to 0.6% of global trade and 0.1% of global GDP.

It said that the announcements of import tariffs by both the US and China on 15 June have raised stakes in trade negotiations and brought back another round of escalation cycle. “Protectionism risks have been on the rise since November 2016 but, more recently, related rhetoric has given way to implementation of import tariffs by the US, with respective trade partners rolling out tariffs in response," Morgan Stanley added.