What happened to demonetisation deposits?

A look at the deposit data before, during and after the months of demonetisation shows that Indians haven’t really bothered to take back the cash that the government forced them to deposit in banks through the cash purge. Indeed, deposits are still growing at a healthy pace of over 10% year-on-year.

The accompanying charts show that almost all the demonetisation-induced deposits found their way into demand deposits, essentially current accounts that pay no interest and a small part into savings accounts (paying 4%). That is because during demonetisation, the public was preoccupied with just depositing cash into whatever account they held. 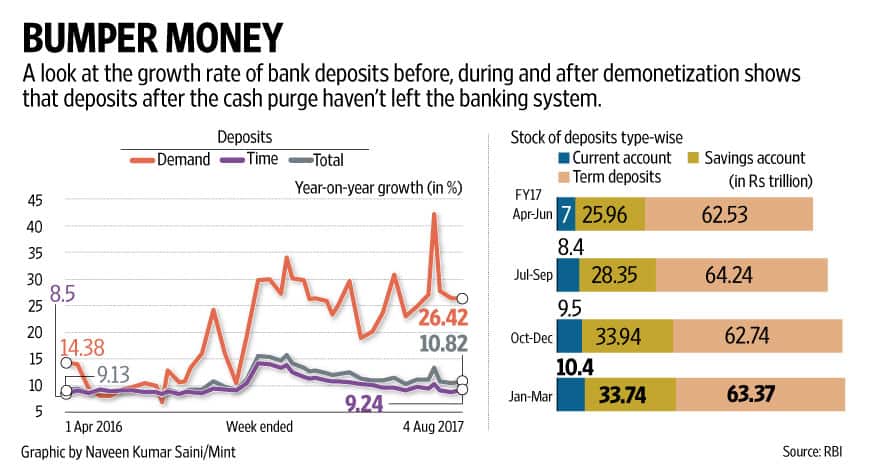 This shows that demonetisation resulted in a permanent improvement in bank deposits while not really inspiring large withdrawals among people in its aftermath. This is why demand deposits are still 26% higher than they were a year ago because whatever money was deposited in banks remains there.

No wonder the country’s largest lender, State Bank of India, was emboldened into cutting its savings rate and expects no big fall in its current account and savings account deposits. The Reserve Bank of India, in an internal study, estimated that excess deposits in banks during the 50 days of demonetisation worked out to Rs4 trillion. Even after considering some tapering off in the two months following demonetisation, the excess deposit works out to not less than Rs3.5 trillion.

This is the stock that banks get to keep if indeed the recent trend in deposit growth is anything to go by. The months following the cash purge saw deposits flow towards more investment-friendly avenues like mutual fund schemes. But eventually even these investments found their way into banks as funds and corporates put their money into current accounts and term deposits.