Low food inflation has been a key contributor but there are fears this may not last as the south-west monsoon is causing some concern, with its coverage turning uneven

Low inflation has been one of the positives about India’s economy in recent times and it has given space to the central bank to lower rates. Low food inflation has been a key contributor but there are fears this may not last as the south-west monsoon is causing some concern, with its coverage turning uneven. That has raised the chances of a lower crop output, posing a risk to food inflation. Fortunately, help may be at hand from the global cereals market.

Data on kharif crop sowing show that as of 8 September, the area under cultivation of rice has declined by 1.4%, of pulses by 4% and coarse cereals by 1.5%. The global crop outlook, however, has improved. Last week saw the UN’s Food and Agriculture Organization (FAO) revise upwards its September forecast for cereal output in 2017-18, over its July forecast.

FAO is projecting global cereal stocks will reach an all-time high in 2017-18. Its current projections imply an increase in cereals output of 18.4 million tonnes (mt) over the July forecast, with wheat and coarse grains being the main contributors, although rice, too, saw a slight upward revision. Overall, cereals output is projected to be marginally higher than the 2016-17 level, but considering that was a good year with a 3% increase in output, even maintaining that level is good.

FAO had earlier estimated 2017-18 will end with cereal stocks of 704 mt, which is now increased to 719.2 mt. This is even as it expects utilization to increase on the back of higher output. Closing stocks of wheat are expected to be substantially higher while that of rice will be marginally higher. 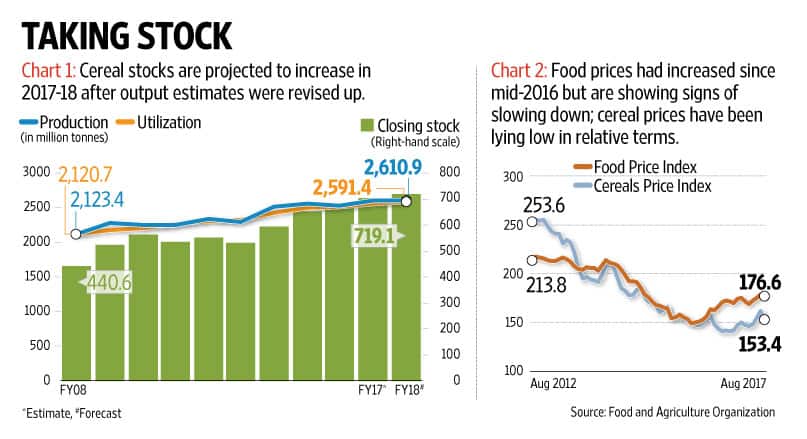 Comfortable global stocks of cereals means the government can import them to supplement domestic supplies. Soft global prices may, in turn, influence domestic prices, too. Although domestic food prices don’t necessarily move in tandem with international prices due to restrictions on imports, the government can use imports to keep inflation under check.

The August edition of FAO’s food price index shows a sequential decline of 2.3% in the August value, although it is still higher by 6% over a year ago. But that’s a low base effect at play, and will wear off in September, after which even the annual increase should be lower.

In August, cereal prices fell by 5.4% sequentially due to good supplies, reversing a three-month trend of rising prices. Sugar and meat prices fell in August, but vegetable oil and dairy prices increased. These form the components of the food price index.

In India, farmers have reduced the area under pulses after the sharp drop in prices and imports may raise international prices of pulses. It’s best to keep an eye on how that plays out.

While the global situation may be conducive to keep food inflation in check and helps the economy, it dims the outlook for agricultural income.

If output is lower and prices remain soft, then farmers will feel the pinch. The ability of state governments to help them may be constrained by their stretched finances, especially in those states that have declared farm loan waivers.

If agricultural income does get affected, that’s bad news for rural demand. It remains an important source of rural income, especially after alternative sources such local industry and construction projects have been hit by weak economic growth.

While it’s too early to call, the risk that rural demand may disappoint in 2017-18 as well remains alive.