Firms look to wait out period of market volatility, amid higher US tariffs, lower prices

Mumbai: Indian shrimp exporters, at least three of whom had queued up for initial public offerings (IPO), are likely to see the launches delayed as a result of increased US tariffs on Indian shrimp exports, softer global pricing and volatility in the Indian stock markets.

The exporters—Devi Sea Foods Ltd, Nekkanti Sea Foods Ltd and Sandhya Marines Ltd—filed their draft IPO prospectuses with market regulator Securities and Exchange Board of India (Sebi) in February and March.Collectively, these three companies are looking to raise around ₹ 2,100-2,200 crore.

“Devi Sea Foods has put its initial public offering launch on hold temporarily, given the overall market conditions. Stock price of listed peers such as Avanti Feeds and Apex Frozen Foods have had a bad time recently and have fallen significantly, due to which the valuations that were expected a few months ago are not realistic today and it’s better that one wait out this phase," said a person aware of the company’s initial public offering plans, seeking anonymity as he is not authorized to speak to the media. 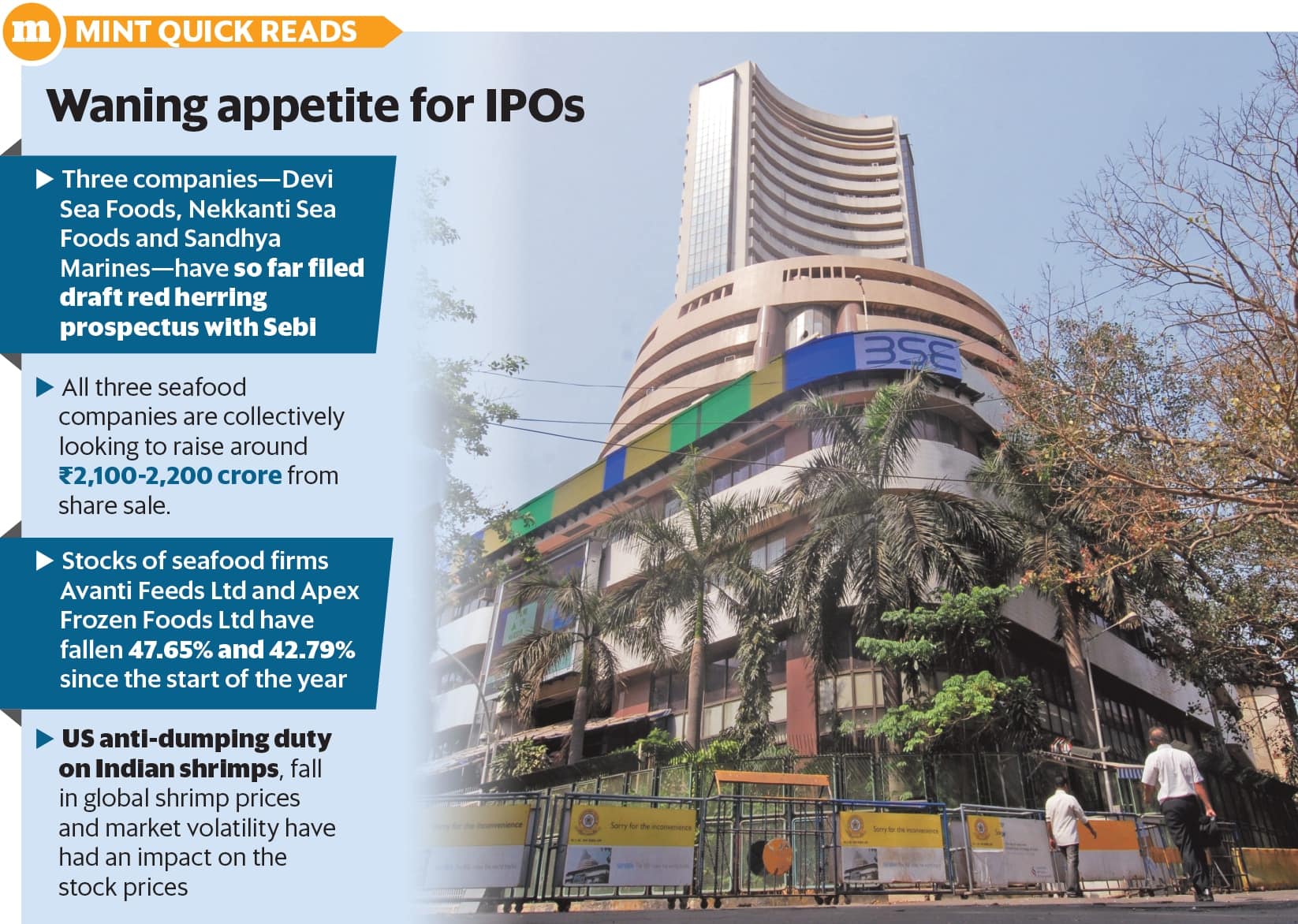 “One of the reasons impacting the sentiment around the sector has been US tariffs and soft global pricing. The US, in March, raised the anti-dumping duty on Indian shrimps to 2.34%, from 0.84%," said a second person aware of the IPO plans of the three companies. This person too requested anonymity.

The US is the biggest market for Indian seafood exports. In the April 2017-January 2018 period, the US imported 203,837 tonnes of Indian seafood worth $1.91 billion, making it the largest export market with a share of 33.99% of all sea food exports from India.

Nekkanti Seafoods is awaiting Sebi approval for the IPO and plans to decide the final timeline post the clearance, a spokesperson for the company said in an email response.

However, according to a third person, also speaking anonymously, companies are planning to wait as they expect the volatility and downturn in the seafoods market to be a short-term phenomenon. “There is a view that the headwinds for the seafoods sector are of a short-term nature and that the pricing will improve going ahead. The companies are thus willing to wait out this period of volatility."

On 1 June, Avanti Feeds in a filing to stock exchanges said pricing of shrimps is expected to improve with US demand coming back on track. “The decline in price is only a temporary reaction and the consumption in the US has come back to normalcy and the demand started picking up and would be restored to normal level soon and is even expected to go up, which is expected to trigger an increase in prices," Avanti Feeds said.

The steep fall in the export prices of shrimps seen over the past three to four months was due to global developments such as a temporary decline in the consumption of shrimps in the US due to a long winter coupled with stable shrimp production in countries like Indonesia, Vietnam, the company’s filing said.